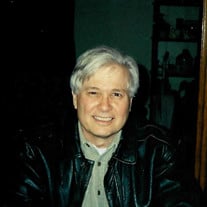 William H. Wingfield, Jr., 81, of Hughesville, passed away on Monday, February 8, 2021 at his home. William was born February 21, 1939 in Guam and was the son of the late William H. and the late Violet E. (Fluman) Wingfield, Sr. He married Gail L. Wetherill on October 19, 1963 and shared 52 years of marriage. William was known to most as "Bill" and as "Billy" to his siblings. He served his country honorably in the U.S Navy during the early Vietnam era and graduated with a business degree from Penn State University. He went on to work in production management for Airsteam USA, Argosy Inc., and Henschen Axle. As a young businessman and father, Bill managed many vacations with his wife, and his three sons whom he loved to spend time with as they grew up. He was also an avid golfer, who loved to golf, fish, and spend time with his many friends and extended family members, well into his later years. He was a huge fan of Penn State wrestling, attending many events. As a senior, he kept active as long as he could by taking long woodland walks almost daily. Bill was a man of good humor, who loved his family, friends, and life. He will be missed by all of us. He is survived by three sons: Daniel R. Wingfield, William H. Wingfield III, both of Williamsport, Robert C. Wingfield of Hughesville; and of seven sisters: Ellen M. Baynard of Hummelstown, Sylvia J. Wingfield of Twin Falls, ID, Carol Webster Wingfield Bower of Rabbittown, Mary A. Getz of Hughesville, Gail P. Boyer of Millersburg, Vanessa S. Ort of Valley View, Nancy L. Krause of Muncy, and by a brother: Roger J. Wingfield of Hughesville. In addition to his parents, William is predeceased by his wife Gail L. Wetherill on March 5, 2016, a son, Troy Wingfield and by a brother, George R. Wingfield. William’s funeral services will be private and held at the convenience of the family. Arrangements have been entrusted to McCarty~Thomas Funeral Home, Hughesville. Expressions of sympathy may be sent to the family at www.mccartythomas.com.

William H. Wingfield, Jr., 81, of Hughesville, passed away on Monday, February 8, 2021 at his home. William was born February 21, 1939 in Guam and was the son of the late William H. and the late Violet E. (Fluman) Wingfield, Sr. He married Gail... View Obituary & Service Information

The family of William H. Wingfield Jr. created this Life Tributes page to make it easy to share your memories.

Send flowers to the Wingfield family.