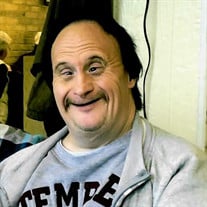 William H. "Billy" Miller, 56, of Muncy passed away Wednesday, March 30, 2022, at his home. Born Nov. 12, 1965, in Williamsport, he is a son of the late Harry H. and Aletha M. (Walker) Miller. Billy was a loving brother and best friend; he was a kind and friendly person to everyone he met. He attended Hope Enterprise for over 30 years and enjoyed spending time with his friends and staff. Mr. Billy loved going on motorcycle rides, watching wrestling, his kitty Fluffy, listening to his radio especially rock and roll, and of course spending time with his family. Billy enjoyed spending time with his big brother Danny when he would come up from Texas for a surprise visit. Brother Bill was Dave’s sidekick for most of his life. Billy really enjoyed going to May’s on Monday morning with Judy and Jerry to get French toast and chat with cook Steve. He had a lot of friends at Mays he would talk to. In his free time, he would stop at the fire station to talk to the firemen and Ems team. We would like to say thank you to the Hospice team for all they have done for Billy. He had great nurses Courtney, Kayla, and Susan. Also, a big thank you to the Home Health Aids Joyce, Sandy, Marsha, and thank you to all who we may have missed. They all gave Billy the upmost of care and are very loving people. We would also like to thank Ashlyn for being such a good caregiver and a loving friend to Billy. Surviving by a brother; David E. Miller with whom he lived in Muncy; three sisters, Ruth A. (Sam) Wertz of Allenwood, Connie S. (Edward) Welliver of Lewisburg, and Edith M. (Benton) Eichenlaub of Muncy; and a half sister, Barb Ryder of Lairdsville; a niece, shelly; two nephews, Joe and Mike, and a great niece Madison. In addition to his parents, Billy was preceded in death by his brother, Danny B. Miller, and his Half Sister, Betty Isom. Funeral services will be held 11 a.m. on Tuesday, April 5 at McCarty-Thomas Funeral Home 557 East Water St., Hughesville, with Rev. Michael C. Reece officiating. Burial will follow at Pleasant Hill Cemetery. Friends may call on Monday, April 4 from 5 p.m. to 7 p.m. at McCarty-Thomas Funeral Home. Memorial contributions may be sent to UPMC Hospice and Hughesville Volunteer Fire Department. Expressions of sympathy may be sent to the family at www.mccartythomas.com.

The family of William "Billy" H. Miller created this Life Tributes page to make it easy to share your memories.