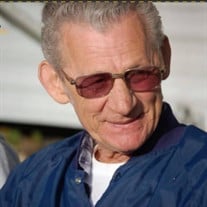 William "Bill" A. Miller, 78, of Muncy, passed away on Saturday, Nov. 13, 2021 at his home in Muncy. Bill was born July 29, 1943 in Hughesville, and is the son of the late William C. and the late Olive Ruth (Parsons) Miller. Bill served his country honorably in U.S. Navy during the Vietnam War and the Cold War. He retired from his lifelong passion as a truckdriver in 2020. Bill was very proud of his military career and all the years he drove as a truckdriver. He often referred to himself as a "Retired Commercial Tourist". Bill loved Penn State football, wrestling, the Oakland Raiders, NASCAR, camping and spending time with his family. Bill was known by his friends as "POP a TOP". Bill was a life member and a Past Commandor of the VFW Muncy Post 3428, Past Commander of the American Legion Post 35 of Hughesville and a member for 59 years, Past Commander of Lycoming County, past 16th Dist. Deputy Commander, member for 59 years of the Highland Lake Manor, member of the Muncy Valley Moose, 40 year member of the 40/8 and the Williamsport Fraternal Order of Eagles. He is survived by two daughters, Ashley L. (David Schell) Miller of Muncy, Terri L. (Forrest) McFarlane of Brentwood, Tenn.; a son, David C. (Christy) Miller of Watsontown; seven grandchildren, Genevieve Schell, Jared, Amber and Seth Fink, Shane, Dylan and Summer Miller; two nieces, Lisa Smith and Misty Jacobs; and by a nephew, Davey Miller. In addition to his parents, Bill is predeceased by a sister, Roxy Fenstemacher; and three brothers, Danny, Carl "Cobb", and David Miller. Funeral services will be held 11 a.m. on Saturday, Nov. 20 at McCarty-Thomas Funeral Home, 557 E. Water Street, Hughesville, with Rev. Stephen R. Smith officiating. Burial will follow in Picture Rocks Cemetery. Family and friends may call from 10-11 a.m. on Saturday at the funeral home. Expressions of sympathy may be sent to the family at www.mccartythomas.com.

The family of William "Bill" A. Miller created this Life Tributes page to make it easy to share your memories.