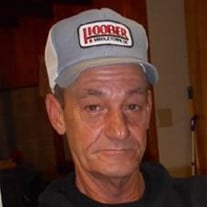 Walter P. “Walt” Charles, 61, of Muncy, died Saturday, November 4, 2017 at home. He is the husband of Penny K. (Fisher) Charles. They were married on July 24, 1998. Born July 10, 1956, in Lewisburg, he is the son of the late Sheldon and Helen (Confer) Charles. Walt attended Muncy High School, and was employed as a Mechanic at Kepner's Farm Supply for over 30 years. He was a member of the Hughesville American Legion Post #35. Walt always took much pride in helping anyone and everyone. He enjoyed spending time with family and socializing with friends. His pride and joy were his four daughters and grandchildren. Walt could fix almost anything and found great pleasure in excavating work. Surviving in addition to his wife Penny, are four daughters, Nicole L. (Douglas) Hubbell of Montoursville, Amanda M. (Michael) Frantz of Hughesville, Ashely S. (Michael) Johnson of Hughesville, Christy L. (Joseph) Cendoma of Williamsport; a step son, Brian N. (Roberta) Fisher of Hughesville; a step daughter, Brandy L. Budman of Hughesville; 12 grandchildren, Haley and Kayden Hubbell, Kesha, Paige, and Noah Frantz, Mitchell, Max, and Aubrey Johnson, Gavin and Vince Cendoma, Ashley and Katie Fisher; a great grandson, Owen Herr; two sisters, Diane Bower of Hughesville, Bonnie S. Pentz of Muncy; five brothers, Wayne A. (Sara Jane) Charles of Montgomery, Sheldon E. (Linda) Charles of Muncy, Edward A. (Peggy) Charles of Hughesville, Roland R. (Becki) Charles of Muncy, and Jeffrey M. Charles of Muncy. In addition to his parents, he was preceded in death by his first wife, Edwina L. (Fairman) Charles; a brother, Kenny E. Charles; and a sister Naomi I. Charles. Funeral services will be at 11 a.m. on Tuesday, November 7, at McCarty-Thomas Funeral Home, 557 E. Water Street, Hughesville, with Rev. Max L. Walters, Jr. officiating. Burial will be in St. James Lutheran "White Church" Cemetery, Muncy. Viewing will be one hour prior to the funeral on Tuesday. In lieu of flowers, memorial contributions may be made in Walter's name to the American Cancer Society at www.cancer.org/donate. Expressions of sympathy may be sent to the family at www.mccartythomas.com

The family of Walter P. "Walt" Charles created this Life Tributes page to make it easy to share your memories.

Send flowers to the Charles family.