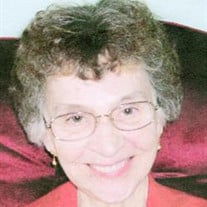 Vivian Temple Kellander, 80, of Muncy, died Wednesday, February 17, 2016 at ManorCare Health Services North, in Williamsport. Born February 12, 1936 in Hughesville, she was a daughter of the late Stephen and Alberta Mae (Houseknecht) Shaner. She married the late, Paul A. Temple, who preceded her in death on May 7, 1982. She then later went on to marry the late, William E. Kellander, who preceded her in death on March 3, 2011. Vivian was a longtime member of St. Mark’s Lutheran Church, in Lairdsville and was also a member of the First United Methodist Church, in Muncy. In her spare time she loved to crochet, read, and was a wonderful cook. She is survived by three daughters, Kathryn Temple of Canton, Bonnie (Andrew) Vanemon of Canton, and Stacha (Tony) Eichenlaub of Millville; a son, William "Bud" (Tammy) Temple of Muncy; a step son, William (Karis) Kellander of McEllhatten; a sister, Jean (Richard) Strait; 11 grandchildren; and10 great-grandchildren. In addition to her husbands and parents, she was preceded in death by a sister, Betty Woods; two brothers, Lester and Howard Shaner; and a step-father, Donald Myers. Funeral services will be held 11 a.m., Friday, February 19 at McCarty-Thomas Funeral Home, 557 E. Water Street, Hughesville, with Pastor Lucy Temple officiating. Burial will follow in the Lairdsville Cemetery. Friends may call from 10 to 11 a.m., Friday, at the funeral home. Expressions of sympathy may be sent to the family a www.mccartythomas.com.

The family of Vivian Temple Kellander created this Life Tributes page to make it easy to share your memories.

Send flowers to the Kellander family.