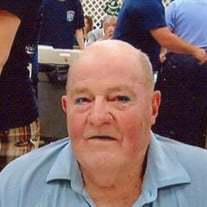 Torrence H. Fulmer, 88, of Unityville, passed away on Friday, Sept. 27, 2019, at Buffalo Valley Lutheran Village of Lewisburg. Torrence was born on Sunday, Feb. 22, 1931, in Muncy Valley. He was the son of the late Glen Dewitt and Ruby Cecil (Phillips) Fulmer. Torrence married Frances Irene Snyder on June 29, 1956, and they shared 58 years together. He served his country with honor in the U.S. Army during the Korean War in the 89th Tank Battalion. Torrence was a lifelong member of Franklin Fairview United Methodist Church now known as Franklin Bethel United Methodist Church. He was a dairy farmer his entire life and was a life member of Hughesville Legion Post 035 and the Lairdsville Volunteer Fire Department. Over the years he worked on a number of road construction crews and was at Grumman's for seven years. He is survived by three daughters, Angela D. (Lynn) Mead, of Millville, Carol "Sue" Rubin, of Wasilla, Alaska, and Tina M. (Abel) VeldKamp, of Anchorage, Alaska; two sons, Alan H. (Janet) Fulmer, of Unityville, and William "Bill" D. (Sandra) Fulmer, of Unityville; a sister, Betty West, of Montgomery, Ala.; five grandchildren, two great-grandchildren, two step-grandchildren and four stepgreat-grandchildren. In addition to his parents, Torrence is predeceased by his wife, Frances, on Oct. 2, 2014, and three brothers, Gleason, Maurice and Ross Fulmer. A memorial service will be held 11 a.m. on Saturday, Oct. 19, at McCarty-Thomas Funeral Home, 557 E. Water St., Hughesville, with Rev. Kathy Burkhart and Rev. Marian K. Anderson officiating. Burial will be private. Friends may call from 9:30 to 11 a.m. on Saturday, at the funeral home. Full military honors will be accorded by the Korean War Veterans of Lycoming County. Expressions of sympathy may be sent to the family at www.mccartythomas.com.

Torrence H. Fulmer, 88, of Unityville, passed away on Friday, Sept. 27, 2019, at Buffalo Valley Lutheran Village of Lewisburg. Torrence was born on Sunday, Feb. 22, 1931, in Muncy Valley. He was the son of the late Glen Dewitt and Ruby Cecil... View Obituary & Service Information

The family of Torrence H. Fulmer created this Life Tributes page to make it easy to share your memories.

Torrence H. Fulmer, 88, of Unityville, passed away on Friday,...

Send flowers to the Fulmer family.