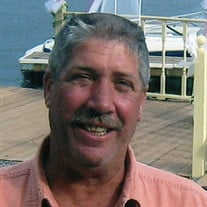 Thomas L. “Tom” O'Connor, 56, of Hughesville, died Friday, October 21, 2016 at home. Born September 18, 1960 in Muncy, he is the son of Leota (VanHorn) O'Connor of Hughesville, and the late James O’Connor. Tom and his wife, Cindy (Hering) Stroble recently celebrated their 18th wedding anniversary on August 15, 2016. Prior to his illness, Tom was employed as a Stone Mason. He was a member of Keystone League, Highland Lake Manor, and the Democratic Club. In his spare time he enjoyed watching westerns and the History Channel. He enjoyed his fishing trips to Fair Haven, NY, with his many friends. He loved English Setters, and will be looking over the Rainbow Bridge to be reunited with his beloved “Riley”. His greatest joy was his grandchildren, and being a caretaker on the mountain for many years at the Welteroth Estate. Surviving in addition to his mother and wife are a daughter, Nicole O'Connor of Hughesville; a son James O'Connor of State College; a step son Albert (Erin) Stroble of Collegeville; three sisters, Jane Daye of Hughesville, Julia (Jim) Foster of Hughesville, Jen O'Connor of Hughesville; a brother Bill (Candy) O'Connor of Hughesville; four grandchildren Morgan O'Connor, Paislee O'Connor, Anna Stroble, and Claire Stroble; his dog Noah, and his cat Fluff. In addition to his father James, he was preceded in death by his brother Charlie O'Connor, and two brother-in-laws, Mike Daye and Mick Haynes. The family would like to express their sincere gratitude to the members of Susquehanna Hospice and Dr. Nesbitt. Their dedication and effort to provide quality care over the last few weeks were a heartwarming blessing to the entire family. We thank God for the gift of his life and the blessing of the time we spent with him. Funeral services will be held 12 p.m. on Saturday, October 29 at McCarty-Thomas Funeral Home, 557 E. Water Street, Hughesville, with Chaplain David Fishel officiating. Burial will be private at the convenience of the family. Friends may call on Saturday from 10 to 12 P.M. at the funeral home. The family will provide the flowers and suggest memorial contributions may be made in Tom’s name to K’s for Cancer, P.O. Box 103, Montoursville, PA 17754, to continue their effort to support families dealing with cancer. Expression of sympathy may be sent to the family at www.mccartythomas.com

The family of Thomas L. "Tom" O'Connor created this Life Tributes page to make it easy to share your memories.

Send flowers to the O'Connor family.