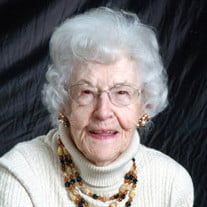 Thelma Mae Sager Ryder, 99, of Muncy Creek Township, died Tuesday, March 20, 2018 at Wolf Run Village, Hughesville. Born December 7, 1918 in Williamsport, she is the daughter of the late Edward Nelson and Minnie Mae (Smith) Snyder. Thelma grew up on her family farm near Muncy and graduated early at age 16, from Hughesville High School, in 1935. After her mother's death, at age 20, she took on the responsibility of taking care of her family and farmhouse. She was a long-time employee of Sylvania Electric Photoflash Division in Montoursville. Thelma was a receptionist at Muncy Valley Hospital for several years. She ran for and was elected as the Muncy Creek Township Tax Collector for two terms. She was also a long-term care-giver for her father, her brother, and both husbands. Thelma was the oldest living member of Moreland Baptist Church, which she joined in 1946. She served as a Deaconess, Choir Member, Sunday School Teacher and Secretary, and Youth Leader. Thelma was a 25-year member of the Muncy Business and Professional Women’s Association. She was active in the Band Parents of Muncy High School. She served as secretary of the Schafer Family Reunion group for many years, and was a member of the Blooming Grove Historical Society. Thelma was a crossword puzzle "fanatic", enjoyed gardening, reading and cooking and baking, especially for large family gatherings. The companionship of a long list of dogs throughout the years was very important to her. She is survived by a son, Wayne K. (Paula) Sager of Muncy; a daughter-In-Law, Linda Whyte of Carlisle; two step sons, Darcey C. (Nan) Ryder of Muncy, Dennis C. Ryder of Dallastown; a granddaughter, Melanie L. (Michael) Starner of New Oxford; two grandsons, Douglas E. Sager of Denver, CO, Morgan S. Sager of Carlisle; a step granddaughter, Dr. Sara E. Emerson, of Greenville, NC; two great grandsons, Derek Starner, and Shane Starner. In addition to her parents, she was preceded in death by her first husband, Fred K. Sager in 1989, after 47 years of marriage, and her second husband, Lewis L. Ryder in 2007; a son, Lynn Sager in 2002; and two brothers, Earl R. Snyder, and Guy V. Snyder. Funeral services will be at 11 a.m. on Saturday, March 24, at McCarty-Thomas Funeral Home, 557 E. Water Street, Hughesville, with her pastor, Rev. Robert Ingraham officiating. Burial will follow in Moreland Baptist Cemetery. Visitation will be Friday, March 23 from 6 to 8 p.m. at the funeral home. Expressions of sympathy may be sent to the family at www.mcccartythomas.com

The family of Thelma Mae Sager Ryder created this Life Tributes page to make it easy to share your memories.