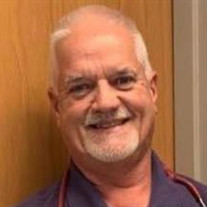 Terry L. Miller, 59, of Hughesville, died Thursday, April 29, 2021 at UPMC Altoona. Born October 21, 1961 in Muncy, he was a son of the late Carl W. and Margaret E. (Laurenson) Miller. He and his wife, the former Maria J. “Jo” George, would have celebrated 31 years of marriage on May 27, 2021. Terry was a graduate of Hughesville High School, Class of 1979, and would go on to graduate from Penn State University with an Associate degree in Surveying and an Associate degree in railroad engineering. He was a self-employed general contractor for several years and was previously employed at Blue Cross NEPA, Baltimore Life Insurance Company, Lowe’s Home Centers and most recently, Susquehanna Health UPMC. Terry was a devoted Christian and member of Hughesville Friends Church where he served as a former Stewardship Elder. He was a former EMT and member of the Picture Rocks Volunteer Fire Company, a former Picture Rocks Borough Councilman, and a former alternate member of the Hughesville Borough Council Planning Commission. Terry was also a member of EAA, Williamsport Bike Club, and served on the board of directors for Sunnybrook Meadows. An outdoor enthusiast, Terry enjoyed skiing, hunting, camping, fishing and mowing grass. In addition, he loved flying, singing, fussing over pets and rocking babies. Surviving, in addition to his wife, are a daughter, Hannah R. Miller of Lancaster; a son, Isaac B. Miller of Hurlburt Field, Fla.; a sister, Lucinda "Cindy" Lohmann of Sweet Valley; and three brothers, Jeffrey C. (Carol) Miller of Muncy, Michael D. Miller of Muncy Valley, and Daniel W. (Debra) Miller of Hughesville. In addition to his parents, Terry was preceded in death by a brother-in-law, John Lohmann. A memorial service will be held 10 a.m. Saturday, May 8, at Hughesville Friends Church, 137 South Third Street, Hughesville, with Pastor Dan Cale officiating. Friends may call from 9 to 10 a.m. Saturday at the church. Arrangements have been entrusted to McCarty-Thomas Funeral Home, Hughesville. Expressions of sympathy may be sent to the family at www.mccartythomas.com.

The family of Terry L. Miller created this Life Tributes page to make it easy to share your memories.