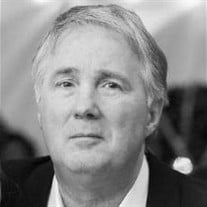 Steven Richard “Steve” Winters, 62, of Muncy, died Thursday, May 3, 2018 at ManorCare Health Services. Born June 1, 1955 in Muncy, he is the son of Margaret V. (Lorimer) Winters of Muncy, and the late Richard Kenard Winters. He was a member of Pennsdale United Methodist Church. Steve was a graduate of Muncy High School class of 1973 and received a football scholarship to attend Juniata College where he received a degree in Business. While at Juniata, Steve was captain of the Judo team and led them to an East Coast National Championship, and later attended the Olympic Training Camp in Colorado Springs. Steve had a weekly talk radio show on WRAK for his nutritional supplement company. Prior to his illness, Steve was employed as a sales manager for Blaise Alexander Chevrolet, Montoursville, and Simmons-Rockwell of Sayre, PA. Surviving in addition to his mother, is a daughter, McKenzie (Tyler) Morton; two sons, Chase (Becky) Winters, Tyler (Jaimi) Winters; four grandchildren, Colson and Eliana Winters, Maximus Morton, Harlow Winters; a sister: Karen E. (Richard) Mowery of Montgomery; a brother, Jerry L. Winters of Muncy; and two nieces, Renee Kennedy, and Kara Herr. A memorial service will be at 7 p.m., on Sunday, May 13, 2018, at the Pennsdale Trinity United Methodist Church, 658 Village Road, Muncy, with Pastor Kevin St. Martin officiating. Interment will be private at the convenience of the family. Visitation will be two hours prior to the memorial service on Sunday at the Church. In lieu of flowers, memorial contributions may be made in Steven’s name to the National Multiple Sclerosis Society at www.nationalmssociety.org/Donate. Services are entrusted to McCarty-Thomas Funeral Home, Hughesville. Expressions of sympathy may be sent to the family at www.mccartythomas.com

The family of Steven R. "Steve" Winters created this Life Tributes page to make it easy to share your memories.

Send flowers to the Winters family.