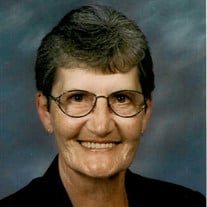 Shirley M. West, 84, of Hughesville formerly of Montgomery, passed away on Saturday, June 5, 2021, at The Gatehouse at Divine Providence Hospital of Williamsport. Shirley was born Nov. 24, 1936, in Nauvoo, and is the daughter of the late Harry J. and the late Leda S. (Miller) Maneval. She married Robert M. West on Sept. 24, 1960 and shared 58 years of marriage. Shirley was a 1954 graduate of Liberty High School and a 1957 graduate of the Williamsport School of Nursing. As a RN, she worked in various hospital departments before having children. When she returned to work, it was in the nursing home setting and retired from Sycamore Manor in 2005. As a talented organist, she shared her gift of music with many happy listeners over her entire life. Shirley loved to golf, knit, sew, bowl, hunt, fish, root for her New York Yankees and make endless batches of her famous peanut butter fudge. She is survived by one daughter, Ursula A. (Todd) Leinbach of Turbotville; two sons, Marc A. (Patti) West of Muncy and Kirk E. West of Denver, Colo.; a brother, Chester Maneval of Williamsport; five grandchildren, Courtney, Alex, Trevor and Madison West and grandson, Andrew Leinbach. In addition to her parents, Shirley is predeceased by her husband, Robert M. West on Dec. 18, 2018; four brothers, Melvin, Dale, Ross and Clair Maneval and by a sister, Doris Hotchkiss. A memorial service will be held 11 a.m. on Friday, June 11 at Zion Lutheran Church, 39 Paradise St. Turbotville, with Rev. Erwin C. Roux officiating. Friends may call from 9:30-11 a.m. on Friday at the church. Burial will be private and held at the convenience of the family. In Shirley’s memory, memorial contributions may be made to Susquehanna Health Foundation, 1001 Grampian Blvd. Williamsport, PA 17701 c/o The Gatehouse. Arrangements have been entrusted to McCarty~Thomas Funeral Home, Hughesville. Expressions of sympathy may be sent to the family at www.mccartythomas.com.

Shirley M. West, 84, of Hughesville formerly of Montgomery, passed away on Saturday, June 5, 2021, at The Gatehouse at Divine Providence Hospital of Williamsport. Shirley was born Nov. 24, 1936, in Nauvoo, and is the daughter of the late Harry... View Obituary & Service Information

The family of Shirley M. West created this Life Tributes page to make it easy to share your memories.

Send flowers to the West family.