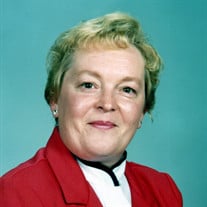 Shirley Thomas Richards, daughter of Richard L. Thomas and Areda E. Thomas was born August 19, 1939 in Nordmont Pennsylvania. She happily and gratefully went to meet her Lord and savior Jesus Christ on April 3, 2018. On August 24, 1969 she married Bernard E Richards at Hughesville Baptist Church and began an amazing adventure that ended with his death on April 15, 2015. Shirley began employment at Sylvania Photoflash on her 18th birthday. The next year she moved to Southern California with her first husband and worked for Bank of America and an independent insurance agent until their return to Pennsylvania in 1965. In 1966 she started work as receptionist at the Bureau of Employment Security, later known as Job Service. She returned to Job Service in Sunbury in 1978 and worked her way through the ranks to retire in 1999 as Employment Security Supervisor in 1999. She took great pride in her children and their achievements and activities, attending many football games and parades to watch them perform and even helped chaperone band camp. She volunteered in various capacities in the Parent School Association for Milton Elementary and Middle schools, including many fund raising projects. Through that she worked with Milton Tomato Harvest Festival and served as Harvest Festival chairman in 1980. Shirley and Bernie vacationed in Florida for many years, traveling the entire state looking for a place to retire. In 2000 they bought a small home in Dunedin and became snowbirds for the next fifteen years from October to April. They acquired a large circle of friends at Golden Acres. They traveled extensively from both homes, enjoying independent travel, bus trips and cruises and each other. Shirley enjoyed many kinds of crafts and studied acrylic and watercolor painting. In later years she crafted homemade greeting cards. She also enjoyed crossword, acrostic, jumble, and Sudoku puzzles. She liked to say she had a short attention span. Shirley is survived by three daughters, Sharon (Buckalew) Ertel, Williamsport, Tammy (Buckalew) French, Montoursville, and Lori Buckalew Brown (Jon), Millville with whom she made her home since Bernie’s death. Also surviving is son Brian D. Richards (Jill Ciciarelli), Pittsburgh, sister Idona Berkheimer, Muncy, five grandchildren, two great grandchildren, and many nieces and nephews. Following her wishes she will join Bernie in Florida where the two of them found so much happiness. There will be no public services; however there will be a family celebration of life at a later time. Arrangements are entrusted to McCarty-Thomas Funeral Home, Hughesville. Expressions of sympathy may be sent to the family at www.mccartythomas.com.

Shirley Thomas Richards, daughter of Richard L. Thomas and Areda E. Thomas was born August 19, 1939 in Nordmont Pennsylvania. She happily and gratefully went to meet her Lord and savior Jesus Christ on April 3, 2018. On August 24, 1969 she... View Obituary & Service Information

The family of Shirley T. Richards created this Life Tributes page to make it easy to share your memories.

Send flowers to the Richards family.