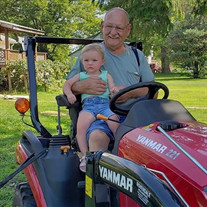 Sheldon Edgar Charles, 76, of Muncy, passed away on Thursday, December 3, 2020. Sheldon was born October 31, 1944 in Muncy and was the son of the late Sheldon A. and the late Helen M. (Confer) Charles. He married Linda M. Johnson on October 1, 1981, and shared 39 years of marriage. Sheldon retired in 2007 after working for over 37 years as a maintenance mechanic. He loved his grandchildren and great grandchildren and passed on his knowledge to be independent to them. Sheldon enjoyed the time he spent with his family and friends. He would help his children, grandchildren, and even friends, anytime day or night. Sheldon enjoyed hunting and fishing, especially salmon fishing in New York with his friends and family. He went to tractor pulls with his brother in the past, but more recently has been going with his grandson, Dustin, and daughter, Mindy. Sheldon cherished the times he spent with his daughter Ann, restoring the 1969 Road Runner for the past several years. Sheldon was very hands on with his family, helping his grandson Dustin, restore his 1967 Charger, assisted his daughter Brenda, pulling her 1964 Thunderbird out of safe keeping, and always helped his son Kevin, on his trucks and tractors. He is survived by his wife: Linda M. (Johnson) Charles, three daughters: Ann P. (Rodney) Fuller, Brenda P. (Jeff) Dapp both of Pennsdale, Mindy L. Sutton of Williamsport, a son: Kevin L. (Jamaica) Charles of Muncy, two sisters: Bonnie Pentz of Muncy, Diane Bower of Hughesville, four brothers: Wayne Charles of Montgomery, Ed Charles of Hughesville, Roland Charles of Pennsdale, and Jeff Charles of Muncy, nine grandchildren, Felicia, Casey, Samantha, Dustin, Caden, Lisa, Novah, Dominique and Jada, nine great-grandchildren, Chevelle, Laurel, Arianna, Jackson, Chloe, Zoe, Piper, Charlie and Giuseppe, and three step-grandchildren, Obie, Kali and Ethan. In addition to his parents, Sheldon is predeceased by two sons, Sheldon A. and Donald A. Charles, two brothers, Kenny and Walt Charles and by a sister, Naomi Charles. Family and friends are invited to attend Sheldon’s 1:00 pm graveside service Tuesday, December 8 at St. James Lutheran "White Church" Cemetery, Fairfield Twp., Muncy, with Pastor James L. Smithgall, Jr officiating. Arrangements have been entrusted to McCarty~Thomas Funeral Home, Hughesville. Expressions of sympathy may be sent to the family at www.mccartythomas.com.

Sheldon Edgar Charles, 76, of Muncy, passed away on Thursday, December 3, 2020. Sheldon was born October 31, 1944 in Muncy and was the son of the late Sheldon A. and the late Helen M. (Confer) Charles. He married Linda M. Johnson on October... View Obituary & Service Information

The family of Sheldon Edgar Charles created this Life Tributes page to make it easy to share your memories.

Sheldon Edgar Charles, 76, of Muncy, passed away on Thursday,...

Send flowers to the Charles family.