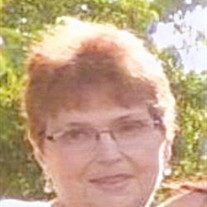 Sharon L. Steele, 66, of Muncy, died Wednesday, October 14, 2015, at her home. Born June 14, 1949 in Williamsport, she was a daughter of the late Howard G. and Gail M. Winters Wadley. She and her husband, John R. Steele Jr., celebrated 46 years of marriage on August 1, 2015. Sharon was a graduate of Williamsport High School, Class of 1969, and was a stay at home mom, who raised five children. She attended Bethel United Methodist Church, Montoursville, and was a member of Muncy Valley Moose and a former member of the Williamsport Moose. Sharon enjoyed ceramics, knitting, crocheting, cooking, and Western movies. She also enjoyed Civil War History, taking train rides, listening to Oldies music, and above all, spending time with her grandchildren. Surviving, in addition to her husband, are four sons, David (Cammie) Steele of Montoursville, Steve (Lisa) Steele of Hughesville, Scott (Rose) Steele of Unityville, and Jim (Darlene) Steele of Hughesville; a daughter, Shannon (Richard) Shelly of Milton; three brothers, Mike (Connie) Hamilton of Montoursville, Fred (Yvonne) Wadley of Virginia Beach, and David (Teha) Winters of Carlisle; a sister, Doris Wadley of Muncy; 11 grandchildren; and seven great-grandchildren. In addition to her parents, Sharon was preceded in death by a sister, Sue Wadley. A memorial service will be held 4 p.m. Saturday, October 31, at the McCarty-Thomas Funeral Home, 557 E. Water St., Hughesville, with the Rev. Richard M. Barner officiating. Friends may call from 3 to 4 p.m. Saturday, October 31, at the funeral home. The family will provide the flowers and suggest memorial contributions to the Gatehouse at www.susquehannahealth.org or the American Cancer Society at www.cancer.org. Expressions of sympathy may be sent to the family at www.mccartythomas.com.

The family of Sharon L. Steele created this Life Tributes page to make it easy to share your memories.

Send flowers to the Steele family.