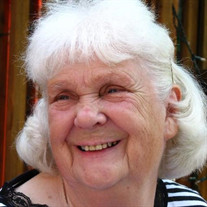 Selma L. “Sally” Andrews, 89, of Hughesville passed away Saturday, April 22, 2017 at home surrounded by her family. She was predeceased by her husband, Max J. Andrews in November 28, 1976. Born January 20, 1928 in Williamsport, she was the daughter of the late Albert Gustaf and Sara Eloise (Hampton) Engdahl. Prior to her retirement she was employed as a nurse’s aide at the former Lysock View Nursing Home, Montoursville. She also worked at Sylvania in Montoursville and for the East Lycoming School District. Sally was a member of the Moose Lodge #2222, Hughesville, and a member of Picture Rocks United Methodist Church where she taught Sunday school. She enjoyed raising Gladiolus flowers, writing poetry, and journaling. Sally loved playing softball and started a women’s softball league in this area. She was an avid Phillies fan. Sally was the force behind starting and maintaining strong family ties through yearly family reunions and parties that are continuing over 30 years later. Her positive outlook and attitude remained with her to her final hours. Sally was a joyful soul with a song in her heart and swing in her step. She left a positive impression with everyone she touched. She is survived by three daughters, Sally L. Alcocer of Hughesville, Kate A. (Mike) Mitchell of Watsontown, Lori J. (Jake) Stiger of Hughesville; two sons, Michael J. (Joanna) Andrews of Dresher, Patrick N. (Judy) Andrews of Hughesville; a sister: Kathryn "Peach" E. (Byron) Bassett of Muncy; a brother, Albert "Sonny" Engdahl of Montoursville; 12 grandchildren, and19 great grandchildren. In addition to her parents and husband, she was preceded in death by a son Daniel Andrews, and two brothers, Roland and Jon "Jack" Engdahl. Funeral services will be at 2 p.m. on Wednesday, April 26, at McCarty-Thomas Funeral Home, 557 E. Water Street, Hughesville, with Chaplain David Fishel officiating. Burial will follow at Muncy Cemetery. Visitation will be one hour prior to the funeral on Wednesday. In lieu of flowers, memorial contributions may be made in Sally’s name to the Alzheimers Association at www.alz.org. Expressions of sympathy may be sent to the family at www.mccartythomas.com

The family of Selma L. "Sally" Andrews created this Life Tributes page to make it easy to share your memories.

Send flowers to the Andrews family.