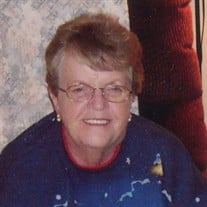 Sandra K. “Sandy” Buck, 75, of Montoursville, passed away Sunday, November 19, 2017 at the Gatehouse. Born October 3, 1942 in Muncy, she was a daughter of the late Robert W. and Marjorie A. (Schneider) King. She married the late Francis C. “Charlie” Buck, who preceded her in death on February 14, 2015. Sandy was a member of the Hughesville Vol. Fire Dept., where she served as an EMT and fire police. She also attended the Bethany United Methodist Church. Sandy enjoyed cooking, puzzles, painting, crafting, and above all being a very loving mother and grandmother. She is survived by a son, Shawn (Stephanie) Buck of Montoursville; four sisters, Nancy L. McCarty of Muncy, Dorothy A. Bennett of Hughesville, Leah (Bill) King-Way of Montoursville, and Betty Jo (Phil) Soohy of Hughesville; a brother, Robert L. (Kathy) King of Indiana; a sister In Law, Joan King of Toledo, OH; two step sons, Gale Buck of Montgomery, and Darren Buck of Hughesville; a grandson, Dylan Buck; four step-grandchildren; four step great-grandchildren; and numerous nieces and nephews. In addition to her husband and parents, she was preceded in death by a step-daughter, Terri McElrath; and a brother, James "Jim" King. A memorial service will be held 1 p.m. Monday, November 27 at McCarty-Thomas Funeral Home, 557 E. Water Street, Hughesville, with Rev. Jane L. O'Borski officiating. Burial will follow in Pleasant Hill Cemetery, Hughesville. Friends may call from 11 a.m. to 1 p.m. Monday, at the funeral home. In lieu of flowers, the family suggests memorial contributions be made in Sandy’s name to the Lycoming County SPCA at http://lycomingspca.org/donate/. Expressions of sympathy may be sent to the family at www.mccartythomas.com.

The family of Sandra K. "Sandy" Buck created this Life Tributes page to make it easy to share your memories.

Send flowers to the Buck family.