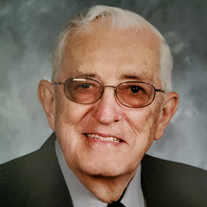 Salvadore “Sal” Bones Jr., 94, of Hughesville died Monday, May 18, 2020 at Valley View Nursing Center, Montoursville. Born February 10, 1926 in Sheppton, he was a son of the late Salvadore Sr. and Anna (Polega) Bones. Sal served his country honorably in the U.S. Army during World War II and was proud of the sacrifices he made for his country. He was one of more than 500,000 American troops that fought in the Battle of the Bulge, the largest and bloodiest single battle fought by the United States in World War II. Sal was wounded in action multiple times and was captured by Nazi forces and held as a prisoner of war. He was ultimately awarded the Bronze Star and Purple Heart for his heroic efforts in defending our freedom. After returning home from defending his country abroad, Sal’s commitment to public service continued with the Pennsylvania State Police. He spent nearly 40 years as a State Trooper and retired in 1986 as a Troop Administrative Manager. Following his retirement from the PSP, Sal was employed with the McCarty-Thomas Funeral Home for over 26 years. Surviving are a daughter, Beth B. (Paul) Wilson of Williamsport; and several nieces and nephews. In addition to his parents, Sal was preceded in death by his wife of 70 years, June V. (Novak) Bones; two brothers, Alfred and Edward Bones; and two sisters, Lucille Wagler and Patricia Hendrickson. Funeral services will be held privately at the convenience of the family. In lieu of flowers memorial contributions may be made to Lycoming County SPCA at www.lycomingspca.org/donate or the Hughesville Fire Department, P.O. Box 53, Hughesville, PA 17737. Arrangements have been entrusted to McCarty-Thomas Funeral Home, Hughesville. Expressions of sympathy may be sent to the family at www.mccartythomas.com.

The family of Salvadore "Sal" Bones Jr. created this Life Tributes page to make it easy to share your memories.

Send flowers to the Bones family.