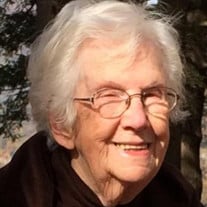 Ruth K. (Hall) McCarty, 95, passed away on Sept. 1, 2020. She was the widow of Clive D. McCarty who passed away in 1997. Born May 28, 1925, she was the daughter of Edward and Elma Hall of Pennsdale. Ruth graduated from Muncy High School in 1943 and was subsequently employed by the A&P grocery store and later worked for the war effort at Muncy Wire Rope. She married her beloved husband after he was discharged from the Army Air Corps and they celebrated over 50 years of marriage working on their family farm in Penn Township. She also enjoyed her many years of service with the Lycoming County Board of Elections. Ruth will be missed and fondly remembered for her love of family, music, singing, playing piano and also her love of cooking, making homemade bread, pizza, cookies and other baked goods. She is survived by four children: Carol Bailey of Benton, Benjamin McCarty of Hughesville, Janet Perkins of Rolla, Kan. and Becky McCarty of Boulder, Colo.; 10 grandchildren, and 13 great-grandchildren. She was preceded in death by her parents and three siblings: Ora, Owen and Russell. Family and friends are invited to attend Ruth's graveside service 1 p.m. on Saturday, Sept. 5, at Mount Zion Lutheran Church Cemetery in Hughesville. In lieu of flowers, donations are welcome to Hamline Church Fellowship, Benton, where Ruth attended, or to the Raven Creek Trading Post, Benton, where she volunteered. Arrangements have been entrusted to McCarty~Thomas Funeral Home, Hughesville. Expressions of sympathy may be sent to the family at www.mccartythomas.com.

The family of Ruth K. McCarty created this Life Tributes page to make it easy to share your memories.

Send flowers to the McCarty family.