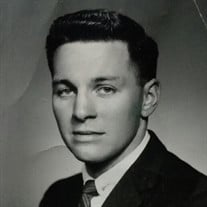 Russell V. Quava, 83, of Muncy Valley, died Sunday, January 26, 2020, at UPMC Susquehanna Williamsport. Born March 18, 1936 in White Haven, he was a son of the late Nicholas and Helen (Koslosky) Quava. He and his wife, the former Nancy C. Dotter, celebrated 59 years of marriage on December 31, 2019. Russ served his country honorably in the U.S. Army during the Vietnam War as a Medic. He retired as a chemist from the former E.R. Squibb company to pursue his dream of opening a ski area. Russ and his wife Nancy developed North Mountain Ski Area at the base of North Mountain in Muncy Valley and would later open the Covered Bridge Restaurant at the same location. For 28 years Russ and Nancy enjoyed serving the area and fostering many wonderful relationships. Russ was an outdoor enthusiast who enjoyed hunting, fishing and skiing. He also had a passion for cooking. Surviving, in addition to his wife, are two daughters, Nadine M. Quava of Harrisburg, and Holly Q. Dillon of Hazelton; a son, Russell C. (Heather Wallis) Quava of Hughesville; a sister, Helen "Cookie" (Richard) Tobin of Eagles Mere; five grandchildren, Patrick N. Dillon, Sean D. Dillon, Samantha J. Quava, Nicholas R. Quava, and Victoria J. Quava; two great-grandchildren, Avery D. Dillon and Emmalynn J. Dillon; and several nieces and nephews. In addition to his parents, Russ was preceded in death by two brothers, Raymond Quava and Edward Quava; and a sister, Marjorie Stolpe. Funeral services will be held at the convenience of the family. Arrangements have been entrusted to McCarty-Thomas Funeral Home, Hughesville. Expressions of sympathy may be sent to the family at www.mccartythomas.com.

Russell V. Quava, 83, of Muncy Valley, died Sunday, January 26, 2020, at UPMC Susquehanna Williamsport. Born March 18, 1936 in White Haven, he was a son of the late Nicholas and Helen (Koslosky) Quava. He and his wife, the former Nancy C.... View Obituary & Service Information

The family of Russell V. Quava created this Life Tributes page to make it easy to share your memories.

Send flowers to the Quava family.