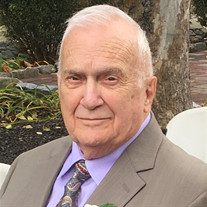 Rudolph G. Krause, Sr., 89, of Wilmington, DE passed away on Thursday, February 10, 2022, at Christiana Hospital in Newark, DE. Rudolph was born on July 17, 1932 in Shrewsbury Twp. to the late J. Bernard and the late Mary E. (Myers) Krause. Rudolph married Joan D. Hock on March 21, 1955. He was preceded in death by his wife on August 1, 2008, after 53 years of marriage. Rudolph served his country honorably with the U.S. Air Force during the Korean War, from August 1950 to September 1953. For 25 years Rudolph worked as an electrical designer for DuPont, retiring in 1996. Rudolph was a member of the American Trapshooting Association, winning several state trapshooting titles. He was an NRA life member and a member of the American Legion and of Ducks Unlimited. Rudolph was an avid hunter and fisherman. He is survived by his sons, Rudolph G. Krause II (Carol) of Pipersville, PA and Randolph G. Krause (Jeanette) of Newark, DE; a sister, Carole “Billie” Hanagan of Germantown, MD; four grandchildren; and two great-grandchildren. In addition to his parents and wife Joan, Rudolph was predeceased by his three brothers, J. Bernard, Jacob, and Thomas Krause; and by two sisters, Margaret McGraw and Charlotte Sapochak. A private family graveside service will be held at the Millville Cemetery, with Pastor Doug W. Mellott officiating. Arrangements have been entrusted to McCarty~Thomas Funeral Home, Hughesville, PA. Expressions of sympathy may be sent to the family at www.mccartythomas.com.

The family of Rudolph G. Krause Sr. created this Life Tributes page to make it easy to share your memories.

Send flowers to the Krause family.