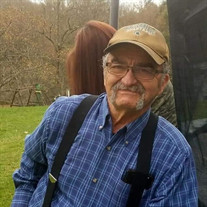 “Pop Pop” Roy E. Maines, known fondly by his family as “Pop Pop” 74, of Hughesville passed away on Sunday, April 26, 2020 with a family member present and surrounded with many other family members via Zoom at the Williamsport Regional Medical Center. Roy was born on Thursday, December 13, 1945 in Winber, PA and was the son of the late Alden James and Goldie Jane (Neff) Maines. Roy married the love of his life Syndria Edith Mendler on May 4, 1974 in Muncy and shared 41 beautiful years of marriage prior to her passing on August 12, 2015. He retired after 30 years of service in 2015 from Spring Window Fashions of Montgomery. Pop Pop enjoyed anything to do with his family, grandchildren, and his dogs Zoey and Abbie. From going fishing and baking cookies, to watching softball, soccer, dance, and chorus concerts if his grandchildren were involved he would be sure to be there. He was also very active with his granddaughter’s girl scouts, going on many scouting trips and campouts. Pop Pop also loved being under the hood of his car with his grandson. Pop Pop was involved in every aspect of his children and grandchildren’s lives and would light up when he spoke of them. He was Pop Pop to all who knew him and would do anything for anyone. Pop Pop loved all sports and when he wasn’t watching his grandchildren play, he would still be at a Hughesville Spartan fields cheering on Hughesville athletes. He loved gardening and just being outside. His witty sense of humor and dancing always had you in stitches and his country music was always on his Spotify. He was loved and cherished by so many and will be so greatly missed. Roy is survived by two daughters: Andria L. Smith of Hughesville, Melissa J. (Morris) Davis of Hughesville, a brother; Tom (Pam) Maines of Jersey Shore, a grandson; Zane Smith, 5 granddaughters; Katlyn Smith, McKenna Smith, Jenna Davis, Emily Davis, Ashley Davis all of Hughesville. In addition to his parents and his wife Syndria E. Maines, Roy is predeceased by a sister; Patty Fox, 3 brothers; Alden Maines, Robert Maines and Danny Stonerook. Due to the COVID-19 virus a memorial mass will be held at Church of the Resurrection of Muncy, with a burial to follow at Pleasant Hill Cemetery at a later date. In Roy’s memory, contributions may be sent to the Hughesville Highschool Spartan Softball Boosters. Arrangements have been entrusted to McCarty~Thomas Funeral Home, Hughesville.

The family of Roy E. Maines created this Life Tributes page to make it easy to share your memories.

Roy E. Maines, known fondly by his family as “Pop...

Send flowers to the Maines family.