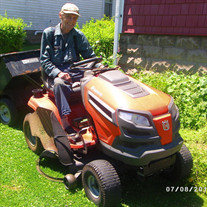 Rodney J. Lamphere, Jr. “Hot Rod”, 77, of New Albany, passed away, Monday, October 8, 2018 at Robert Packer Hospital. Born December 30, 1940 in Sayre, he was a son of the late Rodney C. Lamphere and Beatrice (Treaster) Smith. Rodney started working at the Towanda Movie Theatre, where he met the love of his life. He then worked for the Railroad, and later Hoffman - New Yorker, until his retirement. Rodney was known as the "Lawn Mower King" of New Albany. He loved gardening and helping his neighbors, and he especially loved his daughters. Rodney was always willing to lend a hand to others, never expecting anything in return. He is survived by two daughters, Carissa A.(Pat) Kelley, and Naomi L.(Bill) Ryan both of Dushore; a brother, Kenneth "Butch" Lamphere of Powell; and two grandchildren, Patrick Kelley, Jr. of Dushore, and Ashley Kelley of West Chester. In addition to his parents, he was preceded in death by two sisters, Leona McNeal and Margaret "Peggy" Grenier; two brothers, Robert and Walter Lamphere; and a step-father, Harold Smith. At Rodney’s request, there will be no services. Expressions of sympathy may be sent to the family at www.mccartythomas.com.

The family of Rodney J. Lamphere, Jr. created this Life Tributes page to make it easy to share your memories.