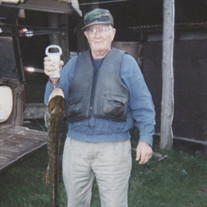 Robert B. “Bob” Woodhead, 87, of Elkland Twp. died Monday, February 13, 2017 at Guthrie Towanda Memorial Hospital. He is the husband of Joan M. (Magee) Woodhead and would have celebrated their 64th wedding anniversary this month. Born March 30, 1929 in Elkland Twp., he is the son of the late Francis I. and Lavinna B. (Caseman) Woodhead. Bob owned and operated his family's dairy farm, a Century Farm, on Millview Mountain in Sullivan County. He made maple syrup and was a noted area carpenter, building his own house and helping anyone who needed a carpenter. He was involved with The Sullivan County Fair Association. In 1973, Bob was a founding member of the Northern Tier Solid Waste Authority and served on its board until his death. Bob was an Elkland Township Supervisor for many years, he tested dairy milk, and was a board member of the Soil Conservation District in Sullivan County, where he was recognized as Farmer of the Year in 1985. He loved to fish and enjoyed many trips to Canada. Bob enjoyed the outdoors, cutting firewood, and especially giving tours of his farm on his ATV. Surviving in addition to his wife Joan, are four daughters, Jacqueline R. (Larry) Fassett of Overton, Holly S. (Scott) Wise of Laporte, Candice M. (Richard) Rexer of Dushore, Marsha H. (Matthew) Romberger of Sayre; three sons, Robert B. (Peggy Trautman) Woodhead, II of Forksville, Mark B. (Connie) Woodhead of Muncy, Jay D. Woodhead of Forksville; a brother R. Lee (Peggy) Woodhead of Montoursville; 22 grandchildren and 21 great grandchildren; a brother-in-law, Sam Valenza of Moorpark, CA; and a sister-in-law, Louise Woodhead of Forksville. In addition to his parents, he was preceded in death by an infant daughter, Cynthia Woodhead; two sisters, Myrna Valenza and Sylvia Bedford; and two brothers, Alpheus Kilmer and Leslie Woodhead. Funeral services will be at 11 a.m. on Friday, February 17, at McCarty-Thomas Funeral Home, 119 Carpenter Street, Dushore, with Mr. James Magee, Robert’s brother-in-law, officiating. Interment will be in Bethel Cemetery, Elkland Twp. Visitation will be from 6 to 8 p.m. on Thursday, February 16 at the funeral home. Expressions of sympathy may be sent to the family at www.mccartythomas.com

Robert B. &#8220;Bob&#8221; Woodhead, 87, of Elkland Twp. died Monday, February 13, 2017 at Guthrie Towanda Memorial Hospital. He is the husband of Joan M. (Magee) Woodhead and would have celebrated their 64th wedding anniversary this month.... View Obituary & Service Information

The family of Robert B. "Bob" Woodhead created this Life Tributes page to make it easy to share your memories.

Send flowers to the Woodhead family.