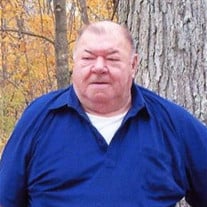 Robert L. “Bob” Van Horn, 77, of Hughesville, died Tuesday, August 8, 2017, surrounded by his loving family. Born October 14, 1939 in Hughesville, he was a son of the late Nelson R. and Florence M. (Secules) Van Horn. His wife of 35 years, Ruth A. Van Horn, preceded him in death on October 29, 2001. Bob was a graduate of Hughesville High School, Class of 1957, and played Little League baseball on one of the first Little League teams in Hughesville. He enjoyed many things throughout his life, from delivering newspapers as a young boy, to working various jobs, building some beautiful homes in the area, running Bob's Texaco station in Lairdsville, and his career at Turnkey Construction. Bob was a life member of the Lairdsville Fire Company, and enjoyed spending time with his granddaughters, and at his cottage on Dalhousie Lake in Ontario Canada. Surviving are a daughter, Roberta L. (Brian) Fisher of Hughesville; a sister, Catherine Gordner of Hughesville; and two granddaughters, Ashley Ruth Fisher and Katie Kay Fisher. In addition to his parents and wife, Bob was preceded in death by a sister, Dorothy Graden, and a brother, Carl Van Horn. Funeral services will be held 10 a.m. Saturday, August 12, at McCarty-Thomas Funeral Home, 557 E. Water Street, Hughesville, with Rev. Max L. Walters Jr. officiating. Burial will follow in Twin Hills Memorial Park, Muncy. Friends may call from 9 to 10 a.m. Saturday at the funeral home. Bob’s family would like to thank the staff of Wolf Run Village and the Gatehouse for the wonderful care that was provided to him over the past two years and during his recent illness. Flowers are welcome; however, memorial contributions may also be made in memory of Bob to a charity of choice. Expressions of sympathy may be sent to the family at www.mccartythomas.com.

The family of Robert L. Van Horn created this Life Tributes page to make it easy to share your memories.