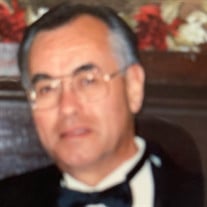 Robert G. Taylor, 72, formerly of Dushore, died Thursday, April 18, 2019 at his home in Williamsport. Born September 21, 1946 in Towanda, he was a son of the late Alfred G. and June (Christman) Taylor. He and his wife, the former Linda M. Bennett, would have celebrated 51 years of marriage on June 22, 2019. Bob was a graduate of St. Basil’s High School, Class of 1964, and the Williamsport Area Community College. He retired in 2004 from the M&T Bank, Dushore, after having worked there for over 30 years as a regional vice president. Bob was a former member of the Dushore Lions Club and served on the board of trustees for the Donald Guthrie Foundation. In his free time, Bob enjoyed watching NASCAR Racing, classic cars, traveling, and above all, spending time with his family, especially his grandchildren. Surviving, in addition to his wife, are a daughter, Michele (Curtis) Myers of Williamsport; two sons, Michael (Christine) Taylor of Millerstown, and Gregory (Jamie) Taylor of Canton; two sisters, Robin (Mark) Dieffenbach, and Patricia Knowlton, both of Wellsboro; a brother, Patrick (Lorrie) Taylor of Dushore; and 12 grandchildren, Logan, Mitchell, McKenna, Parker, Reilly, Shannon, Nate, Ashlyn, Sara, Zachary, Reed, and Aubrey. In addition to his parents, Bob was preceded in death by a son, Chad Taylor; and a brother, Richard Taylor. A Mass of Christian Burial will be held 1 p.m. Tuesday, April 23, at St. Basil's Church, 101 Churchill St., Dushore, with Rev. Thomas Major officiating. Burial will follow in St. Basil's Cemetery. Friends may call from 11 a.m. to 1 p.m. Tuesday at the church. The family will provide the flowers and suggest memorial contributions to the Alzheimer’s Association at www.alz.org or the Dushore Fire Company, P.O. Box 517, Dushore, PA 18614. Arrangements have been entrusted to the McCarty-Thomas Funeral Home, Dushore. Expressions of sympathy may be sent to the family at www.mccartythomas.com.

Robert G. Taylor, 72, formerly of Dushore, died Thursday, April 18, 2019 at his home in Williamsport. Born September 21, 1946 in Towanda, he was a son of the late Alfred G. and June (Christman) Taylor. He and his wife, the former Linda M.... View Obituary & Service Information

The family of Robert G. Taylor created this Life Tributes page to make it easy to share your memories.