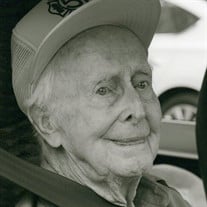 Robert Harvey “Bob” Sullivan, 98, of Eagles Mere, passed away Saturday, January 23, 2021, at the Highlands Care Center, Laporte. Born March 15, 1922 in the Newberry section of Williamsport, he was a son of the late Harvey C. and Juna (Rinker) Sullivan. Bob’s family moved from Williamsport to a farm at Point Bethel near Glen Mawr when he was very young. Bob grew up there and attended Point Bethel grade school and Picture Rocks High School where he was Valedictorian of the Class of 1939. He also lettered in Soccer. Following High School, Bob attended the former Davidson Township High School for vocational training and attained a degree in metal working. He was inducted into the U.S. Army on December 21, 1942, where he attained the rank of PVT 1st Class in the Battery B 211th Ante Aircraft Artillery Weapons Battalion. Bob served in New Guinea and the Southern Philippines and was awarded the Good Conduct Medal, the Philippines Liberation medal with one bronze star, the Pacific Campaign medal with three bronze stars and the WWII victory medal before being discharged on January 1, 1946. On June 27, 1947 he married Mary E. Rider of Eagles Mere. Mary passed away on June 19, 2017, eight days prior to their 75th wedding anniversary. After their marriage they made Eagles Mere their home where Bob built the house they resided in. In 1953 Bob joined the Eagles Mere Fire Company where he spent many hours working on the hand built toboggans and helped build and run the toboggan slide. Later he would draft the plans and help construct Eagles Mere Fire Hall, Station 51. He served as past president of the fire company and of the fireman’s relief association, a trustee for many years and past treasurer of the ambulance association. He was employed with Clayton Dunham, Robert Marquardt, Earl Dubs, Clarence “Tats” Brink and lastly Jack Craft, all for whom he did carpentry. He built and repainted many homes in the Eagles Mere area. Following his retirement, he enjoyed woodworking. Bob would actually cut the trees, saw and dry the lumber, and make grandmother clocks, sideboards and various other furniture pieces. He enjoyed the outdoors, hunting and fishing. When asked how the fishing was, he would say, “the fishing was great, the catching was lousy.” It wasn’t really about catching anything; it was about being able to do it. He bowled in mixed and men’s leagues for many years. In the winter it was ice skating, snowmobiling and downhill and cross-country skiing as a means to enjoy the outdoors. He cross country skied until the age of 92, when macular degeneration forced him to stop, as he could no longer see well enough to ski. In 2002 Bob was inducted into the PA Voter Hall of Fame. He never missed voting in a Presidential election, including the 2020 election. He served as Judge of Elections in Shrewsbury Township for many years. Surviving are a daughter, Patty Sullivan of Eagles Mere; and several nieces and nephews. In addition to his parents and wife, Bob was preceded in death by a brother, Carl Sullivan and his wife Doris; two brothers-in-law, Guy “Jack” Sheets and George “Barney” Rider and his wife, Doris “Dot” Rider; and a sister-in-law, Beatrice “Tiny” Sheets. There is so much more that could be said of a life of nearly 99 years, but to sum it up, he had a good run. A graveside funeral service will be held 1 p.m. Thursday, January 28, at Eagles Mere Cemetery. A celebration of Bob’s life will be held at a later date. In lieu of flowers memorial contributions may be made to the Eagles Mere Fire Company, P.O. Box 56, Eagles Mere, PA 17731. Arrangements have been entrusted to McCarty-Thomas Funeral Home, Hughesville. Expressions of sympathy may be sent to the family at www.mccartythomas.com.

The family of Robert Harvey "Bob" Sullivan created this Life Tributes page to make it easy to share your memories.

Send flowers to the Sullivan family.