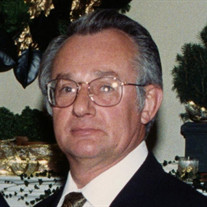 Robert W. “Bob” Hassemer, 73, of Dushore, died Saturday, December 3, 2016, at Towanda Memorial Hospital. Born August 19, 1943 in Phillipsburg, NJ, he was a son of the late Frank and Hilda Mae Hassemer. He and his wife, the former Deanne E. Briglia, celebrated 38 years of marriage on July 21, 2016. Bob served his country honorably in the U.S. Air Force during the Vietnam War. In 1987, after more than two decades of dedicated service to our nation, Bob retired from the U.S. Air Force as an E9 Chief Master Sgt. Following his retirement, Bob returned home and obtained a position with the New Jersey State Parks and Forestry, caring for the grounds of the Governor’s Mansion for many years. An outdoors enthusiast, Bob enjoyed gardening, mowing grass, and caring for his home. He also loved decorating his home for the holidays. Surviving, in addition to his wife, are five daughters, Russann DeVine of WI, Deanne L. (Bobby) Murray of McMurray, PA, Kathy L. (Bill) Zigenfuss of Bath, PA, Michelle D. Busch of Allentown, PA and Wendy L. (Jay) Figar of Lansford, PA; 18 grandchildren; and three great-grandchildren. In addition to his parents, Bob was preceded in death by a brother, Frank Hassemer. Funeral services will be held 1 p.m. Saturday, December 10, at McCarty-Thomas Funeral Home, 119 Carpenter Street, Dushore, with Rev. Phyllis Pelletier officiating. Burial will follow in Colley Cemetery with full military honors. Friends may call from noon to 1 p.m. Saturday at the funeral home. Expressions of sympathy may be sent to the family at www.mccartythomas.com.

The family of Robert W. Hassemer created this Life Tributes page to make it easy to share your memories.

Send flowers to the Hassemer family.