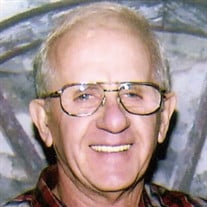 Robert S. "Bob" Harding, 79, of Hughesville, died Friday, September 16, 2016 at Valley View Nursing Center, Montoursville. Born November 24, 1936 in Hughesville, he was a son of the late George T. and Edith Sarah (Warn) Harding. He and his wife, the former Barbara A. Bower, would have celebrated 57 years of marriage on October 8, 2016. Bob served in the Marine Corps. He was employed as a truck driver and owned and operated his family farm in Hughesville. Early in his career he worked at Cecil Thompson Agway in Muncy. He also worked for several area companies including Emerson Myers, Farnsworth Farm Supply, Strick Corporation of Hughesville, Chemical Lehman of S. Williamsport, McCormick Trucking of Muncy, and retired from ADS of Muncy. Bob was a member of the Loyal Order of Moose, Hughesville, and enjoyed hunting on his family farm. Surviving, in addition to his wife, are two daughters, Cathy E. (Lorraine Budnick) Harding of Plymouth and Kristie L. (Bill) Walters of Unityville; two sisters, Shirley (Bob Franklin) Crawley of Hughesville and Elizabeth (Steve) Swisher of Hughesville; a twin brother William (Dorthea) Harding of NJ; and two grandchildren, Wesley T. Walters and Casandra A. Walters. In addition to his parents he was predeceased by a brother, LaRue W. "Rudy" Harding. Funeral services will be held 11 a.m. on Saturday, September 24, at McCarty-Thomas Funeral Home, 557 E. Water Street, Hughesville, with David Fishel, Chaplain of Susquehanna Home Health Services officiating. Burial will follow in Twin Hills Memorial Park, Muncy. Friends may call from 10 to 11 a.m. Saturday at the funeral home. In lieu of flowers, memorial contributions may be made in Robert's name to the Alzheimer’s Association at www.alz.org or to the Lycoming County S.P.C.A., 2805 Reach Road, Williamsport, PA 17701. Expressions of sympathy may be sent to the family at www.mccartythomas.com

Robert S. "Bob" Harding, 79, of Hughesville, died Friday, September 16, 2016 at Valley View Nursing Center, Montoursville. Born November 24, 1936 in Hughesville, he was a son of the late George T. and Edith Sarah (Warn) Harding. He and his... View Obituary & Service Information

The family of Robert S. "Bob" Harding created this Life Tributes page to make it easy to share your memories.

Send flowers to the Harding family.