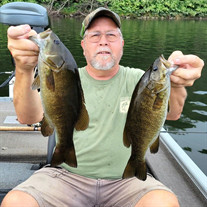 Robbie D. “Rob” Fritz, 63, of Montoursville, died Wednesday, April 6, 2022 at UPMC Williamsport. Rob was born August 31, 1958 in Muncy, and is the son of the late Pierre K. Fritz and Faye Arlene (Bieber) Wilhelm. Rob graduated from Muncy High School in 1977. He retired from Springs Window Fashions after a long career in 2016. For the past 6 years, Rob drove school bus for Susquehanna Transit at the South Williamsport School District. He enjoyed the daily interaction with the students as he drove them to/from school and school sporting events. Rob loved bass fishing, sports, and especially, Penn State football and wrestling. He also loved Ford trucks and driving his classic black convertible Ford Mustang. He is survived by his mother, Faye Arlene (Bieber) Wilhelm of Muncy; significant other, Elaine M. High of Montoursville; a half-sister, Stacia (Brian) Yeick, and by a half-brother, Larry Wilhelm. In addition to his dad, Rob was predeceased by Auriela Fritz, his grandmother, who was instrumental in Rob’s life. Services will be private and held at the convenience of the family. In Rob’s memory, memorial contributions may be made to South Williamsport Athletic Department, 515 West Central Ave. South Williamsport, PA, 17702. Arrangements have been entrusted to McCarty~Thomas Funeral Home, Hughesville. Expressions of sympathy may be sent to the family at www.mccartythomas.com.

The family of Robbie D. "Rob" Fritz created this Life Tributes page to make it easy to share your memories.

Send flowers to the Fritz family.