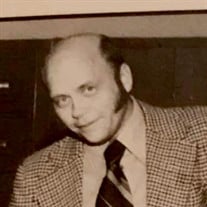 Richard “Dick” W. Hafer, 77, of Hughesville, passed away on Monday, December 28, 2020. Richard was born December 15, 1943 in Sunbury and was the son of the late Joseph M. Hafer and Dorothy E. Renn. He married Rose Marie Shafer on August 18, 1973 at St. Mark’s Lutheran Church of Williamsport. His wife of 46 years preceded him in death on March 24, 2020. They raised two sons, Richie, and Nathan. Richard was a teacher in the East Lycoming School District retiring in 2003 after teaching for 38 years. He taught mathematics and computers at Hughesville High School. Dick was a graduate of the former Sunbury High School, Class of 1961, and earned his bachelor’s degree from Susquehanna University in 1965. Dick was a member of the Pennsylvania State Education Association, the Antique Automobile Club of America, and the North Central Corvette Club of PA. He was an avid collector of license plates and antiques and thoroughly enjoyed antique automobiles and cooking for others. He especially enjoyed making peanut brittle for friends and family during the holiday season. He is survived by his two sons, Richard J. Hafer, of Myrtle Beach, S.C. and Nathan B. Hafer, of Hughesville; and a sister, Janet M. (David) Moyer, of Sunbury. Due to the COVID-19 virus a private family viewing will be held on Saturday, January 2nd. A graveside funeral service will be held at 2:00 p.m. Saturday, January 2, at Pleasant Hill Cemetery, 695 Cemetery Drive, Hughesville, with David Moyer officiating. A celebration of Richard’s life will be planned for a later date. If you should be so inclined to make a contribution in his name the family suggests one of the following organizations: Meagan’s Box, P.O. Box 294, Hughesville, PA 17737; or the American Cancer Society. Arrangements have been entrusted to McCarty-Thomas Funeral Home, Hughesville. Expressions of sympathy may be sent to the family at www.mccartythomas.com.

The family of Richard "Dick" W. Hafer created this Life Tributes page to make it easy to share your memories.

Send flowers to the Hafer family.