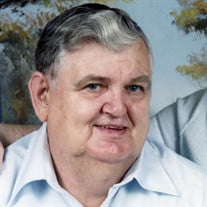 Richard C. Garnhart, 91, of Winfield, formerly of Muncy, died Thursday, June 14, 2018. His wife of 64 years, Mildred M. (Rishel) Garnhart, died October 21, 2016. They were married on February 10, 1952. Born June 2, 1927, in Muncy, he is the son of the late Albert Wesley and Rose Regina (Hall) Garnhart. Richard graduated from Muncy School District, class of 1947. He began his career with Spencer Heater, then Avco Lycoming, and retired from Textron Lycoming where he built and repaired airplane engines. He worked for Burns International Security, the Muncy Police Department, and Montgomery Mills. Richard also owned and operated Garnhart's Disposal Service and Garnhart's Taxi Service. He was a member of Pennsdale and Faxon Kenmar United Methodist Churches. Richard was active in local sports, as a player, coach, umpire, and referee, including football, baseball, basketball, softball, and bowling. He coached Pop Warner Football from 1970-75, and was Commissioner for Pop Warner in 1975. Richard coached Intermediate Baseball for two years. He was an umpire in softball and baseball for over 10 years. He played basketball and softball into his 50's. Richard was a loving husband, father, and grandfather. Surviving are three daughters, Kathryn R. Burkay of Louisville, KY, Susan M. (David) Houseknecht of Muncy Valley, Jeanne L. Garnhart of Winfield; a son, Richard A. (Charlotte) Garnhart of McEwensville; nine grandchildren; seven great grandchildren; and four step great grandchildren. In addition to his wife and parents, he was preceded in death by six sisters, Edna Hutchinson, Mary Mincemoyer, Bessie Anderson, Edith Anderson, Ruth Hall, and Jeanne Noll; and a brother Donald Hutchinson. Funeral services will be at 11 a.m. on Tuesday, June 19, 2018 at McCarty-Thomas Funeral Home, 557 E. Water Street, Hughesville, with Pastor Max L. Walters officiating. Burial will be in Muncy Cemetery. Visitation will be on Monday, June 18, from 6 to 8 p.m. at the funeral home. In lieu of flowers, memorial contributions may be made in Richard's name to the American Cancer Society at https://donate3.cancer.org. Expressions of sympathy may be sent to the family at www.mccartythomas.com

The family of Richard C. Garnhart created this Life Tributes page to make it easy to share your memories.

Send flowers to the Garnhart family.