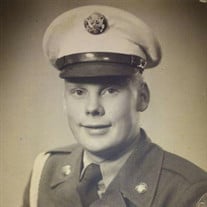 Raymond “Gus” E. Richlin Sr., 87, of Dushore, passed away unexpectedly on Thursday February 25, 2021. Raymond was born June 12, 1933 in Sayre and was one of 8 children of the late Theodore R. Richlin and Leona Shilkowski Richlin. Raymond married Shirley G. Shrimp of Dushore, on May 12, 1959 and celebrated their 61st wedding anniversary last May. Raymond served his country honorably in the U.S. Army as a Military Policeman overseas and in the United States. He enlisted on March 9, 1953 and was honorably discharged on March 9, 1956. He served two years overseas in hostile territory and one year at Fort Benning GA. When released from active duty he was transferred to the Army reserves to complete another 8 years. He received the National Defense Service medal issued by the Army of Occupation of Austria. He was also a platoon Sargent. Some places that he worked were 4 years in PennDOT as an equipment operator and later in Bernice Mines, Mildred, as a driller and a supervisor. He was a life time member of the following: VFW New Albany, where at one time he served as Commander; the American Legion in Mildred for 64 years and received a 60-year medal for membership; and the Rod and Gun Club Monroeton,. He enjoyed hunting, fishing, gardening, canning, making maple syrup, family gatherings, and Stormy his dog. He was a jack of all trades. He knew how to do carpentry work, electrical, plumbing, run heavy equipment and could fix anything. If you needed help, he would drop what he was doing and help you. He was survived by his wife Shirley (Shrimp) Richlin; their four children Debra Richlin Lynn Haven, FL; Raymond E. (Andrea) Richlin Jr. Dushore, Lisa Ann Richlin Dushore, and Tammy (Norton) Parker Dushore. Grandchildren and great grandchildren: Amanda Richlin; Adam (Sally) Richlin children Mckenzie, Kinlee, Raden and Jayden; Geri Sue Richlin; Trey (Abbie) Richlin; Jacob Richlin; Francis (Becky) Richlin children Vickie, Cheyenne and Nathan; George Lichtenberger children Georgie and Bridget; Cindy (Jeff) Wilson children Kaleb, Aiden, Samantha, and Makyla; Jason (Shawnna) Stueck children Leo and Liam. Also surviving are a brother Carl Richlin, Columbus, NC; and two sisters Ruth Thomas, Lincoln Falls, PA and Theresa Weaver Dushore, and several nieces and nephews. He was preceded in death by his brothers Francis Richlin, James Richlin, two infant children (sister and brother) and brothers-in-law Ronnie Thomas and Richard Weaver. He had many friends that we would like to thank for their help. A few are Jessie and Barbara Painter, Timothy and Christine Nitcznski, and Walt Gavitt. In lieu of flowers send donations to the Dushore Ambulance, VFW in New Albany or the American Legion in Mildred. We will have a celebration of life later this year; time and location to be announced later in the Sullivan Review. A mass of Christian burial will be held 11:00 a.m. on Friday, March 5, 2021 at St Basil Catholic Church of Dushore with Rev. Fr. Thomas Major officiating. Burial with full military honors will follow at the St. Francis Xavier Cemetery in Overton. Arrangements have been entrusted to McCarty~Thomas Funeral Home, Dushore. Expressions of sympathy may be sent to the family at www.mccartythomas.com.

The family of Raymond E. Richlin, Sr. created this Life Tributes page to make it easy to share your memories.

Send flowers to the Richlin, family.