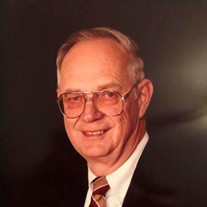 Raymond H. Bower, 82, of Huntersville, passed away on Friday, Aug. 30, 2019, at UPMC Susquehanna with family and his pastor by his side. Raymond was born on Thursday, June 17, 1937, in South Williamsport, the son of the late Raymond E. and Mabel L. (Fisher) Bower. He married Carol L. Webster on Nov. 25, 1967, and shared 51 years of marriage. Raymond was a member of Huntersville United Methodist Church and Muncy Lodge No. 299 F&AM. He served his country in the U.S. Army and retired from Young Industries in Muncy, June 2007, after over 40 years of employment. After Raymond's retirement, he spent his time volunteering for Meals on Wheels, revitalizing the Webster Family Orchard with the help of his brother-in-law, Kent Webster, and his young apprentice, Jeremiah Lauchle, and held several different offices along with teaching Sunday school at the Huntersville United Methodist Church. He attended a monthly poker group for over 60 years, enjoyed playing golf and was an avid Penn State Football and New York Yankees fan. He loved spending time with his family and his most favorite pastime was being with his grandchildren. He is survived by his wife, Carol L. Webster Bower; a son, George D. (Holly) Wingfield, of Valrico, Fla.; a daughter, Karen L. (James) Russell, of West Grove, Pa.; a sister, Margaret Plotts, of Huntersville; and five grandchildren, Abigail Wingfield, Kira Russell, Joshua Wingfield, J.T. Russell, and Briana Russell. In addition to his parents, Raymond is preceded in death by two brothers, James and Richard Bower. Funeral services will be held 11 a.m. Saturday, Sept. 7, at McCarty-Thomas Funeral Home, 557 E. Water St., Hughesville, with Rev. Kevin St. Martin officiating. Burial will follow in Webster Cemetery, Huntersville. Friends may call from 10 to 11 a.m. Saturday, at the funeral home. In Raymond's memory, contributions may be made to Huntersville United Methodist Church, 5263 Rabbittown Road, Muncy, PA 17756. Expressions of sympathy may be sent to the family at www.mccartythomas.com.

Raymond H. Bower, 82, of Huntersville, passed away on Friday, Aug. 30, 2019, at UPMC Susquehanna with family and his pastor by his side. Raymond was born on Thursday, June 17, 1937, in South Williamsport, the son of the late Raymond E. and... View Obituary & Service Information

The family of Raymond H. Bower created this Life Tributes page to make it easy to share your memories.

Raymond H. Bower, 82, of Huntersville, passed away on Friday,...

Send flowers to the Bower family.