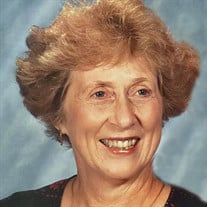 Phyllis A. Snyder Phyllis Arlene Snyder, 74, of Moreland Township went to be with her Lord on Friday, June 4, 2021. Phyllis was born on December 14, 1946, the firstborn of the late Neil L. and O. June (Smith) Shaner. She married David J. Snyder on August 21, 1965, and shared 55 years of marriage. She is survived by her husband: David J. Snyder and their children: Philip S. (Wendy) Snyder of Wellsboro, Brenda S. (Kevin) Strickland of Benton/Muncy, Melissa J. (Daniel, Jr.) Rogers of Montoursville, and Kane D. (Laura) Snyder of Muncy. Oma’s grandchildren include Brooke and Mitchell Snyder; Josh, Zack, Heath, and Gable Strickland; Daniel J. Rogers III; and Kase, Clara and Cora Snyder. Her siblings include: Keith (Kathy) Shaner, Vicki (Walt) Reed, Terry (Terri) Shaner, Tom (Barbara) Shaner, Craig Shaner, Chris (Cindy) Shaner, Joni (Wayne) Ritter, Wendy (Jerry) Daugherty, and Amy (Ed) Rogers, all of the Hughesville area. Her family also includes father-in-law James L. (Betty, deceased) Snyder; her brothers-in-law Larry Snyder, Jay (Barb) Snyder, Roger (Sharon) Snyder, and Jeff, deceased (Bonnie) Snyder, all of the Muncy area. She also held her 33 Shaner and 11 Snyder nieces and nephews close within her heart. She was a 1964 honors graduate of Hughesville High School and a graduate of Williamsport Area Community College receiving her LPN degree. She worked at Muncy Valley Hospital in the Labor & Delivery Unit, assisting in delivering many of her nieces and nephews, until its closure. She continued working as a clinic nurse at Geisinger Medical Group Lycoming until 2009. She was an active member of Moreland Baptist Church serving as a children’s Sunday School teacher, deaconess, and VBS teacher. She served as an East Lycoming School board member. She was very involved in her children's and grandchildren's education, sporting events, and extra-curricular activities. She established her grandmother name as “Oma” when she visited her brother and his family in Germany the year her first grandchild was born. She was known as Oma to many others, as well. Oma loved to babysit her grandchildren. She was very fond of her childhood horse, Honey Bee, which her own children enjoyed too. She loved her husband’s hunting dogs. One of her most prized accomplishments was being a nurse and helping others. She was known for her commitment to her church, and people always looked forward to her peanut brittle. Phyllis took great pride in her children and raised them to be caring, Christ-centered individuals exemplifying their mother. “May the work I’ve done, speak for me.” Funeral services will be held at 11:00 a.m. on Friday, June 11 at Moreland Baptist Church, 118 Moreland Baptist Road, Muncy with Rev. David Guenin and Greg Houseknecht officiating. Burial will follow in the Moreland Baptist Church Cemetery. Visitation will be held from 5-8 p.m. on Thursday, June 10 at the church. In Phyllis’s memory, memorial contributions may be made to the Moreland Baptist Church or The American Heart & Stroke Association. Arrangements have been entrusted to McCarty-Thomas Funeral Home, Hughesville. Expressions of sympathy may be sent to the family at www.mccartythomas.com.

Phyllis A. Snyder Phyllis Arlene Snyder, 74, of Moreland Township went to be with her Lord on Friday, June 4, 2021. Phyllis was born on December 14, 1946, the firstborn of the late Neil L. and O. June (Smith) Shaner.... View Obituary & Service Information

The family of Phyllis Arlene Snyder created this Life Tributes page to make it easy to share your memories.

Send flowers to the Snyder family.