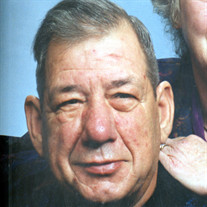 Paul L. Van Horn, 86, of Hughesville died Monday, February 13, 2017 at the Gate House. Born July 29, 1930 in Hughesville, he was a son of the late Ralph C. and Hazel Edna (Burkhart) Van Horn. His wife of 62 years, the former Helen Hubler, preceded him in death on January 28, 2017. Paul served his country honorably in the U.S. Air Force during the Korean War, and during his time was stationed in Africa. He was a lifetime member the 40 et 8, Highland Lake Manor, the American Legion, and the VFW. Surviving are two daughters, Paula (Jerome) Moser of Hughesville, and Candace (Richard) Nearhoof of Muncy; a sister, Leota O'Connor of Hughesville; a brother, Chalmer Van Horn of Muncy; two grandchildren, Brooke (George) Walters of Muncy and Brock Nearhoof of Loyalsock; and five great-grandchildren. In addition to his wife and parents, he was preceded in death by a brother, Roland Van Horn. Funeral services will be held 11 a.m. Saturday, February 18, at McCarty-Thomas Funeral Home, 557 E. Water Street, Hughesville, with Pastor Jerry Uppling officiating. Burial will follow in Pleasant Hill Cemetery, Hughesville. Friends may call from 10 to 11 a.m. Saturday, at the funeral home. In lieu of flowers, the family suggests memorial contributions be made to the Gatehouse Hospice, 1100 Grampian Blvd., Williamsport, PA 17701 or the Mapleton Community Center, 2350 Highland Lake Rd., Hughesville, PA 17737. Expressions of sympathy may be sent to the family at www.mccartythomas.com.

The family of Paul L. Van Horn created this Life Tributes page to make it easy to share your memories.