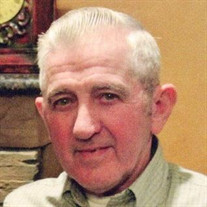 Paul J. McCoy, 84, of Muncy, died Tuesday, January 22, 2019 at his home. Born August 17, 1934 in Muncy, he was a son of the late John ST and Estella H. (Swartz) McCoy. He and his wife, the former Iva M. Burkhart, celebrated 43 years of marriage on October 9, 2018. Paul was a graduate of Hughesville High School, Class of 1952, and was later inducted into the Athletic Hall of Fame. He was an avid wrestling fan and statistician who was the first Hughesville wrestler to compete at States. Paul retired in 1994 from the former Sprout Waldron’s, Muncy, after having worked there for nearly 40 years. He also had a passion for farming which he did for most of his life. Paul enjoyed cultivating the natural attributes of his farm and during his free time he could be found hunting or trapping. Giving back to the community was very important to Paul as he was a member of several organizations, which included: Muncy Lodge #299 F. & A. M., The Scottish Rite Valley of Williamsport, A. A. S. R., and Roaring Run Hunting Club. He was also a member of the Messiah Lutheran Church, Clarkstown, where he held various leadership positions over the years. As a member of the Picture Rocks Lions Club, Paul received the Melvin Jones Fellow Award for his dedicated humanitarian services. Surviving, in addition to his wife, are four daughters, Kelley A. (Clay) DeWald of Millville, Donna R. (Jerry) Fought of Hughesville, Eva R. (Jay) Tittle of South Pasadena, CA and Vicki M. (Mike) Grausam of Hughesville; three sons, Michael K. (Cathy) McCoy of Muncy, Shawn K. (Melanie) McCoy and Shane (Patricia) McCoy, both of Hughesville; four sisters, Joanne Snyder of Hughesville, Mary (Fred) Barto of Hughesville, Esterbelle Valiquette of Watsontown, and Ruth (Ernie) Rishel of Muncy; two brothers, Jack (Diane) McCoy and Kenny (Linda) McCoy both of Montgomery; 15 grandchildren; and 12 great-grandchildren. In addition to his parents, Paul was preceded in death by a brother, William McCoy, and a sister, Dorothy McCoy. Funeral services will be held 10 a.m. Saturday, January 26, at Messiah Lutheran Church, 2041 Route 442 Hwy, Muncy, with Rev. Beverly J. Cotner officiating. Burial will follow in Twin Hills Memorial Park, Muncy. Friends may call from 6 to 8 p.m. Friday, January 25, at the McCarty-Thomas Funeral Home, 557 E. Water Street, Hughesville. The family will provide the flowers and suggest memorial contributions to Messiah Lutheran Church, Muncy. Expressions of sympathy may be sent to the family at www.mccartythomas.com.

The family of Paul J. McCoy created this Life Tributes page to make it easy to share your memories.

Send flowers to the McCoy family.