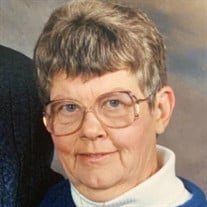 Patricia A. Miller, 78, of Hughesville passed away peacefully with her children by her side on Sunday, September 12, 2021, at UPMC Williamsport. Born February 19, 1943, in Williamsport, she was a daughter of the late Clarence George and Esther Louise (McDaniel) Bowman. Pat attended South Williamsport high school. Her husband of 49 years, Cloyd W. Miller, whom she married April 4, 1964 preceded her in death on December 25, 2013. Known by most as “Pat”, she wore many hats throughout her life; Daughter, Sister, Aunt, Wife, Mother, Grandmother “Meme”, and most recently Great-Grandmother. She was her family’s biggest fan and strongest supporter. In her free time Pat enjoyed camping with her children and husband. Throughout her incredible marriage, she and Cloyd, “Pop” traveled to 49 of the 50 states, an accomplishment she held very dear to heart. For many years, they enjoyed going to country music concerts, festivals, and local fairs. Pat was a member of Fairview United Methodist Church, Unityville Pa. In the earlier years of her marriage, Pat enjoyed the camaraderie and being heavily involved in preparing the annual Thanksgiving church meals. Pat was an avid baker and enjoyed cooking and hosting family meals. Her apple pies will be dearly missed. Her house was known for late night conversations, laughter, and memories. In addition to, she was a member of the order of the Eastern Star #500, Williamsport, Pa. Her passions included spending time with her family, but especially her “pride and joys” were her children, grandchildren, and her great-grandson Everett, along with her loyal companion dog Ginger. As well as, shopping aka “rammin” and going out to lunch with her sister, daughter, daughter in law, and granddaughter. She is survived by her children and their families; A son, Brian S. (Amber) Miller of Hughesville; a daughter Christina “Chris” L. (Joel) Ibaugh, 2 granddogs – Oreo and Rusty of Dauphin; two sisters, Bonnie L. Johnson, and Jackie L. Stroble both of Williamsport. A granddaughter, Kayleighia “Katie” G. (Matt) Pendrak and a grandson, Cody A. Miller both of Hughesville. And most recently, her first and only Great-Grandson, Everett Pendrak. Additionally, many nieces, nephews, and cousins. You could always count on a Meme for a snack, a smile, a hug, and a good conversation. Despite various health challenges, she was the life of the party and loved to be present for any and all family gatherings. She will be forever missed and remembered. Love you Mom & Meme, “stroll through heaven” with Pap, and we will see you again someday. A memorial service will be held 11:00 a.m. on Saturday, September 25 at McCarty-Thomas Funeral Home, 557 E. Water Street, Hughesville, with James Toohey officiating. Burial will be at the convenience of the family. Friends may call from 10-11 a.m. on Saturday at the funeral home. Arrangements have been entrusted to McCarty-Thomas Funeral Home, Hughesville. Expressions of sympathy may be sent to the family at www.mccartythomas.com.

Patricia A. Miller, 78, of Hughesville passed away peacefully with her children by her side on Sunday, September 12, 2021, at UPMC Williamsport. Born February 19, 1943, in Williamsport, she was a daughter of the late Clarence George and Esther... View Obituary & Service Information

The family of Patricia A. Miller created this Life Tributes page to make it easy to share your memories.

Patricia A. Miller, 78, of Hughesville passed away peacefully...