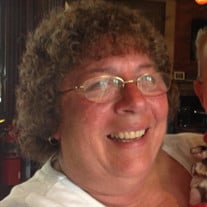 Patricia Ann “Pat” McMunn, 65, of Hughesville, died Tuesday, August 21, 2018 at UPMC Susquehanna Williamsport. Born March 19, 1953 in Williamsport, she was the daughter of the late Maurice E. and Bettie Jean (Liddic) Hering. Pat was a 1971 graduate of Williamsport High School. She was employed as a cook at various establishments until her retirement in 2013. She was a member of the Ladies Auxiliary of the Hughesville American Legion, Post #35. Prior to her illness she enjoyed playing setback at Lindauer's Tavern with her pal Millie, and her yearly trip to The Woodlands with her many girlfriends. She was an avid fan of the Dallas Cowboys, New York Yankees, and Penn State Nittany Lions. Pat cherished spending time with her four grandchildren, Taylor J., Keira A., and Michaella E. Briggs, and Lucy E. Brink; and her great-grandson Hunter D. Briggs. Surviving are two daughters, Heather M. (Grady) Walker of Hughesville, and Amy C. (Wes) Brink of Williamsport; two sisters, Cindy M. O'Connor of Hughesville, and Kathy E. (William) Karschner of Montoursville; and niece Tammie Hartland and nephews Albert Stroble and Matthew Karschner. In addition to her parents she was preceded in death by a brother-in-law, Tom O'Connor, in 2016. Funeral services will be held 12 p.m. on Saturday, August 25, at McCarty-Thomas Funeral Home, 557 E. Water Street, Hughesville, with Pastor Harold "J.R." Heddings officiating. Visitation will be Saturday from 11 a.m. to 12 p.m. at the funeral home. Expressions of sympathy may be sent to the family at www.mccartythomas.com

The family of Patricia A. McMunn created this Life Tributes page to make it easy to share your memories.

Send flowers to the McMunn family.