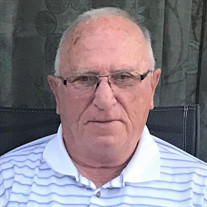 Oliver Wendell Holmes, 86, of Hughesville, died at home surrounded by his family on Tuesday, October 26, 2021, at his home. Born August 7, 1935, in Hughesville, he was a son of the late Jasper W. and Lena E. (Weaver) Holmes. Oliver served his country honorably in the U.S Marine Corp for six years. After returning from the war, he began his career with the former Schnadig Corporation, Montoursville, where he served as Chief Union Steward for five years. Oliver also served as Wolf Township Supervisor for six years. Giving back to his community was very important to Oliver as he volunteered with many local charities and civic organizations. He was a supporter of the Hughesville Fire Department and the Red Cross, donating 22 gallons of blood over his lifetime. Oliver was a member of the Picture Rocks Lions Club for over 28 years, serving as past president, and had 100% meeting attendance during that time. Additional memberships included the Hughesville Baptist Church serving as Sunday School Superintendent for 11 years, and as Deacon and Trustee for many years, the Hughesville Rotary Club, and the Iola hunting club for over 40 years. Oliver served as past president of the East Lycoming School District PTA and served on the East Lycoming School Board from 1975 to 1981. He was a faithful follower of the wrestling program and various other high school sporting events as well. Oliver loved mother nature and all she had to offer. He enjoyed spending time at the cabin with family and friends, golfing with his grandson and nephews, bowling, and traveling. He and his wife Patricia traveled to all 50 states including, Hawaii and Alaska. Surviving are two daughters, Wendy L. (Terry) Walter of Muncy, and Brenda L. (Rick) Hilbert of Wilmore, Ky.; two grandchildren, Jason (Kellie) Walter, and Janelle (Kevin) Walker; seven great-grandchildren; one brother; and two sisters. In addition to his parents Oliver was preceded in death by his wife of 65 years, Patricia (Lunger) Holmes. The family will hold a memorial service on Sunday, November 7, beginning at 2 p.m. at the Hughesville Fire Hall, 30 S. Railroad St., Hughesville, with Pastor Thomas Holmes and Pastor Jerry Uppling co-officiating. Burial will be held privately in Pleasant Hill Cemetery, Hughesville. Friends may call from 12 p.m. to 2 p.m. Sunday at the firehall. The family will provide the flowers and suggest memorial contributions to either the Hughesville Volunteer Fire Department, or the Son Light House, 130 Carpenter St., Muncy, PA 17756. Arrangements have been entrusted to McCarty-Thomas Funeral Home, Hughesville. Expressions of sympathy may be sent to the family at www.mccartythomas.com.

Oliver Wendell Holmes, 86, of Hughesville, died at home surrounded by his family on Tuesday, October 26, 2021, at his home. Born August 7, 1935, in Hughesville, he was a son of the late Jasper W. and Lena E. (Weaver) Holmes. Oliver served... View Obituary & Service Information

The family of Oliver Wendell Holmes created this Life Tributes page to make it easy to share your memories.

Send flowers to the Holmes family.