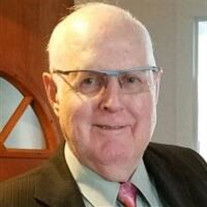 Olen Kenneth Shaffer, 81, of Estella, died on December 12, 2018 at his home in Estella. Born on December 7, 1937, in Forks Township, Sullivan County, he was the son of the late Omer F. and Cora E. Shaffer. He is predeceased by two brothers and three sisters. He is survived by a sister, Betty (Bernie) Megelky of Boulder Creek, California. He was married to Ann E. Tego of Sarasota, FL where they have their residence. He and Ann spent summers in Estella and winter at their Florida residence. He was very involved in church at Living Hope Fellowship in Estella and in Florida he was a member of The Harvest in Sarasota, FL where he was a mentor and generous to many young people in both congregations. His first job was at Penelec in Dushore and then went to the Towanda office where he was until he retired and then entered full time into real estate. He was an accomplished businessman and landowner in the community. He enjoyed spending time on his excavator, bulldozer and tractor and loved to dig in the dirt. He is survived by his wife Ann E. Tego; three daughters, Myrna D. (Mark) McKinnie of Pottstown, Karla E. (her fiancée Joe Grella) Eisenhard of Ellenton, FL, and Margo Shaffer Miller of Sarasota, FL; the children’s mother, Judith Ross of Sarasota, FL; a grandson, Merrick McKinnie; a step-daughter, Vanessa A. (Ben) Cruz of Palmetto, FL; a step-son, Stephen R. Tego of East Alton, IL; and three step-grandchildren, Talon, Brooklyn and Avery Cruz of Palmetto, FL. A memorial service will be held 2 p.m. Saturday, January 12, at the McCarty-Thomas Funeral Home, 119 Carpenter St., Dushore with Pastor Scot Magann and Pastor Jacob Lund co-officiating. Burial will be held privately in the East Forks Union Cemetery. Friends may call from 1 to 2 p.m. Saturday, January 12, at the funeral Home. Expressions of sympathy may be sent to the family at www.mccartythomas.com.

Olen Kenneth Shaffer, 81, of Estella, died on December 12, 2018 at his home in Estella. Born on December 7, 1937, in Forks Township, Sullivan County, he was the son of the late Omer F. and Cora E. Shaffer. He is predeceased by two brothers... View Obituary & Service Information

The family of Olen Kenneth Shaffer created this Life Tributes page to make it easy to share your memories.

Send flowers to the Shaffer family.