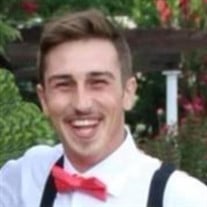 Nicholas Joseph Malara, 31, of South Williamsport, passed away Friday March 26, 2021. He was born February 21, 1990 in Phoenix, Arizona, the son of Frank and Sandra (Hummel) Malara. Nick was co-owner of F&S (Father and Son) Renovations with his dad. They were each other’s best friend. An adventurous soul with the biggest heart, Nick shared his bright light with everyone he met. He would turn strangers into best friends, never hesitating to give them the shirt off his back. He was a shooting star full of passion with so much love to give. He enjoyed snowboarding, wrestling, camping, self-expression through music and tattoos, spending time with family and friends, and his mom’s Sunday dinners. But Nick was most passionate about his son, Maddox. The true love he felt for his boy was bigger than the universe. Maddox was the light in his father’s eyes, and his best friend. An inseparable pair, this father and son duo were unstoppable. In addition to his parents, Nick is survived by his son, Maddox J. Malara; a sister, Dayna (Jeff) Comitz; a niece and nephew, Poppy and Clay; maternal grandmother, Ruth Pierce; aunts and uncles, Darlene and Rich Reynolds, Debbie and Ray Hummel, and Joyce Smejkal; along with numerous cousins and friends. Funeral services will be held 1 p.m. Saturday, April 3, at Hughesville Friends Church, 137 S. Third St., Hughesville, with Pastor Bethany Woods officiating. Friends may call from 11 a.m. to 1 p.m. Saturday at the church. In lieu of flowers, a trust fund has been set up for Nick’s son, Maddox Joseph Malara. A limb has fallen from the family tree that says, “Grieve not for me.” Remember the best times, the laughter, the song, the good life I lived while I was STRONG. Arrangements have been entrusted to McCarty-Thomas Funeral Home, Hughesville. Expressions of sympathy may be sent to the family at www.mccartythomas.com.

Nicholas Joseph Malara, 31, of South Williamsport, passed away Friday March 26, 2021. He was born February 21, 1990 in Phoenix, Arizona, the son of Frank and Sandra (Hummel) Malara. Nick was co-owner of F&S (Father and Son) Renovations with... View Obituary & Service Information

The family of Nicholas Joseph Malara created this Life Tributes page to make it easy to share your memories.

Send flowers to the Malara family.