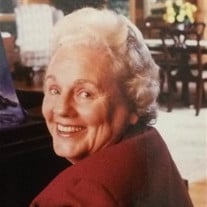 Natalia Raigorodsky Parris, 89, of Muncy Valley, died Tuesday, August 28, 2018, at The Highlands Care Center, Laporte. Born July 28, 1929 in Tulsa, Oklahoma, she was a daughter of the late Paul M. and Ethel M. (McCaleb) Raigorodsky. Her husband of 16 years, James L. Parris, preceded her in death on April 3, 2003. A native of Oklahoma, Natalia grew up in Texas and composed her first musical piece at the age of eight. With the onset of World War II, she was relocated to Maine, and attended the Oak Grove School. She graduated cum laude from both Emma Willard School in Troy, New York, in 1946, and Barnard College in 1952, and went on to attain her master’s degree in composition and music history from American University in 1963, the same year she completed her first symphony – “Symphony No. 1.” Since 1990, the composition has been performed by the Chattanooga Symphony, the Washington Civic Symphony, and the Williamsport Symphony Orchestra. In 1978, Natalia began a lifelong commitment of restoration and preservation of what is now known as Keystone Mountain Park Trust, located on a mountain top, above the village of Muncy Valley. For over 40 years, she would call this tranquil setting home. The beautiful surroundings enabled her to find sanctuary for a deeply spiritual life, and was an inspiration for her musical composition. Before settling in Muncy Valley, Natalia was active in the D.C. arts scene, working in arts broadcasting and as a newspaper music critic, serving on arts boards, and composing her work. She has written nearly 155 compositions including secular chamber works and sacred solos and organ preludes used in churches in the United States, Canada, and Central America. Her music has also been played in the State Department, the National Gallery of Arts, and in churches and music halls throughout the world. Natalia was a member of the First Church of Christ, Scientist for over 50 years and was a full time Christian Science Practitioner for more than 20 years. She was devoted to her faith in the one omnipotent God good, and following the teachings of Christ Jesus. Surviving her are a son, Charles H. Heimsath V of Austin, Texas; three grandchildren, Serena Heimsath Heath, Charles H. Heimsath VI and Kathryn L. Haynes; and a great-grandson, Liam Heath. In addition to her parents and husband, Natalia was preceded in death by a son, Peter R. Heimsath. A memorial service will be held at 11 a.m. Saturday, September 22, at Celestial Views Chapel, 66 Keystone Mountain Park Rd., Muncy Valley, with Nathan Bowan officiating. Burial was held privately in Hillcrest Cemetery, Sonestown. The family will provide the flowers and suggest memorial contributions be made to: Keystone Mountain Park Trust, 66 Mountain Park Rd., Muncy Valley, PA 17758. Arrangements have been entrusted to the McCarty-Thomas Funeral Home, Hughesville.

The family of Natalia Raigorodsky Parris created this Life Tributes page to make it easy to share your memories.

Send flowers to the Parris family.