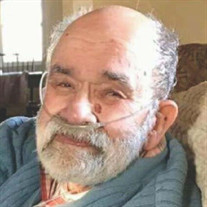 Myron L. Richard, 84, of Montoursville, died Wednesday, April 12, 2017 in Elizabethtown. Born April 29, 1932 in Hughesville, he was a son of the late Harry H. and Brittie I. (Harding) Richart. He married the former, Joan M. Rampulla, who preceded him in death in 2014. Myron served his country honorably in the U.S. Air Force. He retired from Williamsport Hospital in 1987 and from Litton Industries in 1996. Myron was a member of the multiple organizations including, the American Legion, the Korean War Veterans of Lycoming County, the VFW, the Fraternal Order of the Eagles, 40 et 8 Highland Lake Manor and the Knights of Columbus. He enjoyed hunting, volunteering with the boy scouts, watching baseball, traveling with his wife, and spending time with his grandsons. He is survived by one daughter: Joni (David) Martin of Elizabethtown, PA and one son: Joe (Nancy) Richard of Vacaville, CA; and seven grandchildren, Elijah, Noah, and Isaiah Martin, all of Elizabethtown, Journrey Silva of Norman, OK, Kaili Beebe of Emeryville, CA, Tresten Besserer and Nolan Besserer, both of Henderson, NV. In addition to his wife and parents, he was preceded in death by a sister, Geraldine Huffman; and six brothers, LaRue, Herman, Stanley, Eugene, Harry Jr "June", and Harley "Pete" Richart. A Mass of Christian Burial will be held 11 a.m. Monday, April 17, at Our Lady of Lourdes Church, 100 Walnut St., Montoursville, with Father Michael S. McCormick officiating. Interment will be in Resurrection Cemetery, Montoursville. A visitation will be held from 5 to 7 p.m. Saturday, April 15, at McCarty-Thomas Funeral Home, 557 E. Water St., Hughesville. In lieu of flowers, the family suggests memorial contributions be made to Our Lady of Lourdes Church, 100 Walnut St., Montoursville, PA 17752, where he served as an usher. Expressions of sympathy may be sent to the family www.mccartythomas.com.

Myron L. Richard, 84, of Montoursville, died Wednesday, April 12, 2017 in Elizabethtown. Born April 29, 1932 in Hughesville, he was a son of the late Harry H. and Brittie I. (Harding) Richart. He married the former, Joan M. Rampulla, who... View Obituary & Service Information

The family of Myron L. Richard created this Life Tributes page to make it easy to share your memories.

Send flowers to the Richard family.