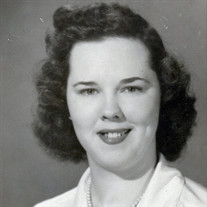 Miriam Gladys “Gram” Brown, 88, passed into the loving arms of Jesus on Tuesday, May 8, 2018, surrounded by her family. She was a devoted Christian who will be greatly missed by her family. Miriam was born to the late Earl and Ada (Herman) Miller in Weigh Scales on January 30, 1930. She graduated from Shamokin High School. Miriam was married to Floyd A. Brown on May 3, 1952, and together they celebrated 66 years of marriage. Miriam was the first baby baptized at the Clarks Grove United Methodist Church in Irish Valley by her grandfather. In earlier years she was a member of the Moreland Baptist Church until moving to Hughesville where she became a member of the Christ United Methodist Church and attended faithfully along with her family for many years. She was a self-taught organist and accordionist. Miriam was a lifetime member of the Order of the Eastern Star. Miriam worked at Westinghouse in Sunbury, and Ashkar Elementary School in Hughesville. With her husband, they lovingly raised three children and worked on their family farm. She enjoyed spending time with family, friends, and her beloved little dog, Susie; crocheting; canning; cooking; baking; hunting in her earlier years; vacations at Myrtle Beach with her family; and her red geraniums in the summertime. In her younger years she enjoyed spending time roller skating at Knoebels and later going with her family. Miriam is survived by her husband, Floyd; her children, Michele (Fred) Perry of Hughesville, Robert (Lisa) Brown of Muncy, and Marcia Reigle of Hughesville; her grandchildren, Jillian (Joseph) Haines of Picture Rocks, Travis (Lindsey) Perry of Hughesville, Michael Perry of Bloomsburg, Christopher (Dianna) Brown of Muncy, and Jenna (Michael) Sellers of Muncy; and great-grandchildren Carter Haines, Colton Haines, Bailey Perry, Jackson Perry, Alessandra Perry, Kelsey Brown, Cassidy Brown, Molly Brown, Parker Brown, Regan Sellers, Kennedy Sellers. Miriam was preceded in death by her parents, as well as her brother, Robert Miller. A celebration of Miriam’s life will be held at noon on Monday, May 14, 2018, at The Beacon: A United Methodist Church, 111 South Second St., Hughesville, with Rev. Jane O’Borski and Rev. Robert Ingraham co-officiating. She will be laid to rest in the Pleasant Hill Cemetery, Hughesville. Friends may call from 10 a.m. till noon on Monday at the church. Flowers are welcome; however, memorial contributions may also be made to UPMC Susquehanna Home Care & Hospice at www.susquehannahealth.org/giving-back/donate/make-a-donation or mail to 1100 Grampian Blvd., Suite 4, Williamsport, PA 17701, or to The Beacon: A United Methodist Church, 111 South Second St., Hughesville, PA 17737. Arrangements have been entrusted to the McCarty-Thomas Funeral Home, Hughesville. Expressions of sympathy may be sent to the family at www.mccartythomas.com.

Miriam Gladys &#8220;Gram&#8221; Brown, 88, passed into the loving arms of Jesus on Tuesday, May 8, 2018, surrounded by her family. She was a devoted Christian who will be greatly missed by her family. Miriam was born to the late Earl and... View Obituary & Service Information

The family of Miriam Gladys Brown created this Life Tributes page to make it easy to share your memories.

Miriam Gladys “Gram” Brown, 88, passed into the loving arms of...

Send flowers to the Brown family.