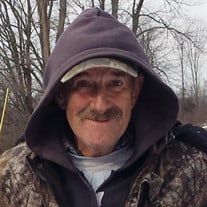 Milo K. Reibson, 73, passed away peacefully on November 3, at his home in Estella. Born September 6, 1945, he was a son of the late Maynard and Marcella(Brenchley) Reibson. Milo was a graduate of Loyalsock High School in Estella, Class of 1963. He completed several continuing education courses in agricultural sciences and was a DHIA milk tester after high school. He married Betty (Reed) Reibson on June 27, 1964. He was a lifelong dairy farmer becoming part of Reibson Farms(established in 1946) in 1967 and acquiring the farm in full upon his parents' retirement in 1979. He belonged to several farm and agricultural organizations during the course of his career. He successfully ran Reibson Farms until his own partial retirement in August 2016 at which time Reibson Farms became a three generation farm with his sons taking ownership. His first love was always his family, but his second love was his farm, his animals, and the land, a love that he passed on to his children and grandchildren. While not a religious man, he was a true believer. He was an honest, hardworking man with a quick wit and a flare for being mischievous. He enjoyed reading science magazines and watching documentaries when he could. He was happiest when sitting by the bonfire, visiting with friends and family, and stargazing, frequently spotting satellites in the night sky before anyone else, and occasionally howling at the local coyotes to hear their reply. He loved spending time with his grandchildren, taking them on the tractors and around the farm, showing them the baby animals, finding four leaf clovers for them, teasing them, and hiding their toys, especially a well worn bunny. In return, he was just tickled by them teasing him back, occasionally ending up with his alien buddy Paul Junior in unusual places. He was crazy about the color blue and would try to convince anyone who would listen that it just made things run/work/live/look better if they were blue. He is survived by his wife of 54 years, Betty Reibson of Estella; two sons, Scott and Randy Reibson of Estella; a daughter, Sally Cooper of Niceville, Florida,; two grandchildren, Morgan and Max Cooper of Niceville, Florida; a sister and brother-in-law Carol and Tom Diehl of Muncy; a sister-in-law Millie(Lee) Reibson of Wellsboro; two brother-in-laws, Jim Reed and Sonny(Donna) Reed of Linden; and a multitude of nieces, nephews, and great nieces and nephews. He was predeceased by his parents, Marcella Reibson in 2004 and Maynard Reibson in 2006; two brothers, Raymond Reibson in 1969 and Lee Reibson in 2010; and a nephew, Dennis (Lee) Reibson in 2008. A memorial service will be held on Friday, November 9, at 1 p.m. at McCarty-Thomas Funeral Home, 119 Carpenter Street, Dushore. Friends may call from 11 a.m. up to the time of the service...preferably wearing something blue. Burial service will follow at Bethel Cemetery, Estella. The family will provide the flowers and suggest memorial contributions be made to the Relay for Life - Sullivan County at 1948 E. Third Street, Williamsport, Pennsylvania 17701 or to the Eldredsville Fire Company, 402 Route 4007, Forksville, Pennnsylvania. Expressions of sympathy may be sent to the family at www.mccartythomas.com.

Milo K. Reibson, 73, passed away peacefully on November 3, at his home in Estella. Born September 6, 1945, he was a son of the late Maynard and Marcella(Brenchley) Reibson. Milo was a graduate of Loyalsock High School in Estella, Class of... View Obituary & Service Information

The family of Milo K. Reibson created this Life Tributes page to make it easy to share your memories.

Send flowers to the Reibson family.