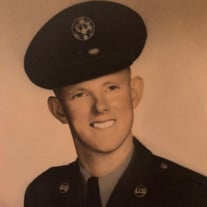 Miles L. "Smiley" Long, 81, of Muncy, died Monday, October 1, 2018, at Skilled Nursing & Rehabilitation Center, Muncy. Born July 14, 1937 in Bloomsburg, he was a son of the late Leo and Vera (Hall) Long. He and his wife, the former Lyvera M. Holdren, celebrated 54 years of marriage on July 5, 2018. Miles was a graduate of Hughesville High School, Class of 1956, and served his country honorably in the U.S. Airforce during the Korean War. He was employed at the former Anton Waldman’s, Hughesville, for 40 years and retired in 2001 from the former Strick, Inc., Danville. Following his retirement he enjoyed delivering medications for Ben Franklin Pharmacy, Clarkstown. Miles was a very talented individual who could build or fix anything, including his own home. He was an avid hunter and fisherman who loved gardening. Miles was an active member of the 39 Plus and the VFW Post 3428, Muncy. He was also a 50 year member of Muncy Lodge #299 F. & A. M. and a 50 year member of Caldwell Consistory, Williamsport. Surviving, in addition to his wife, are a son, Ronald E. (LeAnn) Dunkleberger of Clarkstown; a sister, Faye Kessler of Berwick; three grandchildren, Brianne (James) Foster, Riley Dunkleberger, and Grant (Jessica) Dunkleberger; two step-grandchildren, Michael DiSicisio, and Jonathan DiSicisio; and four great-grandchildren. In addition to his parents, Miles was preceded in death by a sister, Velma Charles; and a brother, Blaine Long. Funeral services will be held 9 a.m. Friday, October 5, at McCarty-Thomas Funeral Home, 557 E. Water Street, Hughesville, with Rev. Stephen R. Smith officiating. Burial will follow in New Rosemont Cemetery, Bloomsburg, with graveside military honors accorded by combined veterans’ organizations. Friends may call from 6 to 8 p.m. Thursday, October 4, at the funeral home. Expressions of sympathy may be sent to the family at www.mccartythomas.com.

Miles L. "Smiley" Long, 81, of Muncy, died Monday, October 1, 2018, at Skilled Nursing & Rehabilitation Center, Muncy. Born July 14, 1937 in Bloomsburg, he was a son of the late Leo and Vera (Hall) Long. He and his wife, the former Lyvera... View Obituary & Service Information

The family of Miles L. "Smiley" Long created this Life Tributes page to make it easy to share your memories.

Send flowers to the Long family.