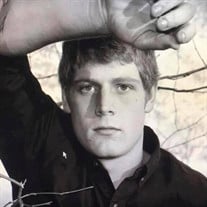 Michael S. Hull, 24, of Hughesville, passed away Thursday, March 19, 2020 at his home. Born October 22, 1995 in Williamsport, he was a son of Denis R. Hull and Missy A. (Rogers) Magargle. Michael was a graduate of Hughesville High School, Class of 2015, and was currently employed at Pro Frac. In his free time Michael enjoyed 4-wheeling, gaming, playing blackjack, working on cars and, most of all, spending time with his family and friends. Michael would surprise his mom, Missy, at work by stopping in, and she would light up with excitement and immediately get the biggest hug. She would stare up at him with pride and joy, excited he was home from his oilfield job safe and sound. She always looked forward to their date nights at the movies, casino, or just a conversation over dinner. Michael spent a great deal of time with Denis and Jenny, his father and second mom. Michael could spend the day on the water or just helping his dad around the property. He never missed an opportunity to sit down at the dinner table and fill his belly with one of Jenny’s home cooked meals or wrap his arms around all his siblings during family get togethers. Denis and Jenny will forever miss his presence and will love him forever and know they will see him again. Michael is survived by his siblings; Sydney Palmer, Jordan Hull, Jamee McCloskey, Alexys Yannes, Alexis Jones and Ryan Jones. They love him endlessly and will forever cherish their memories with him. Never one to miss an opportunity to make someone laugh even at his own expense, he brought joy and laughter into any situation. He liked to make fun of his siblings just as much as they liked to make fun of him. Known for saying “whaaat?”, his siblings would mock him and he would laugh and tease them in return. Michael was always pushing himself to be the best person he could be and was loved by all. Michael will be remembered as one of the most magnetic, fantastic, caring individuals ever to exist. Michael also has two nephews, Liam and Killian, nieces Savannah and Emma, and a niece on the way, Aleia. He loved to hang out with them at every family get together and be like one of the kids. He loved those kids with all of his heart and would do anything to see them happy. He often played alongside the kids, taking them out on four-wheeler rides, buying them the “most annoying” kid’s toys he could find, and being the goofy uncle, they adored. Michael loved Brittany Henderson and her daughter Addy. He would sit and watch cartoons or play on the floor with Addy. He loved her like she was his own daughter and she looked up to him because he could get on her level with his childish and goofy behavior. One of the last things he told his mother was how much he loved the two of them. Also surviving are his two grandmothers Denise Jones and Ginny Rogers. Michael’s grandfather Darrel Rogers passed away last month. Michael’s friends describe him as the most genuine friend anyone could hope to come into contact with. It didn’t matter if you had just seen him or it had been months, he’d greet you with a smile, a big hug, and a ridiculous one liner. He was so full of life, and you always knew he was in the room. For his friends that he called brothers, Zach, Trevor, Tyler, Jamie, and Matt; know he loved each one of you and held each of you close to his heart. Those friendships were meaningful and important to him. He considered you his “family.” He would tell stories about all of your shenanigans and make us laugh (or make his mother worry!) He was blessed to have you all in his life. Michael’s family wants everyone to remember his joy, and his playfulness, and to live life to the fullest. Hug those you love, cherish every second, laugh, and love. And when you sing honky-tonk songs around a bonfire, tell stories of his life, and never forget him. Due to the current CDC guidelines, a private funeral service will be held at McCarty-Thomas Funeral Home, 557 E. Water St., Hughesville. Michael’s family apologizes for restricting his friends from paying tribute to their son at this time. However, a celebration of life service is being planned for the future. In lieu of flowers, please call an old friend and let them know you were thinking of them.

Michael S. Hull, 24, of Hughesville, passed away Thursday, March 19, 2020 at his home. Born October 22, 1995 in Williamsport, he was a son of Denis R. Hull and Missy A. (Rogers) Magargle. Michael was a graduate of Hughesville High School,... View Obituary & Service Information

The family of Michael S. Hull created this Life Tributes page to make it easy to share your memories.

Send flowers to the Hull family.