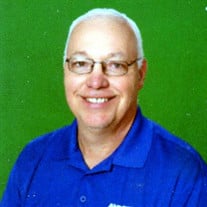 Michael Paul Burkhart, 64, of Hughesville, died Wednesday, May 9, 2018 at Skilled Nursing & Rehabilitation Center in Muncy. Born July 8, 1953 in Muncy, he was a son of the late Max and Ruth E. (Padget) Burkhart. He married the former Kathy F. McKee, and together they would have celebrated 46 years of marriage on July 1, 2018. Michael was a graduate of Hughesville High School, Class of 1971. He worked at Andritz Inc., for 44 years. In his earlier years, he repaired Citizen Band radios and scanners. Michael was a member of the First United Methodist Church, Muncy where he was a trustee and a sound technician. He was also an associate member of the First United Methodist Church, Jersey Shore. Michael was an excellent bowler and bowled a 299 and a 300 game. He served on the Board of Directors for the Lycoming County Bowlers Association and the Pennsylvania State Bowlers Association. In his spare time Michael enjoyed bicycling, camping, Yankee baseball, softball leagues, Nascar, and traveling to see major league baseball games and stadiums. He had the opportunity to enjoy games at 23 stadiums, and was able to visit all 50 states with his wife and father-in-law, Howard McKee. In addition to his wife, he is survived by a daughter, Kimberlie Burkhart (James) Kohler of Lititz; a son, Kevin Michael (Sabrina) Burkhart of Montgomery; two sisters, Patti Barto of Muncy, and Susan (Kevin) Heater of Washington, PA; a brother, David Sr. (Darla) Burkhart of Montoursville; and three grandchildren, Delissa S. Kohler of Spring Grove, and Caleb M. and Bryce L. Burkhart, both of Montgomery. Funeral services will be held 4 p.m. Monday, May 14, at First United Methodist Church, 602 South Market Street, Muncy, with his pastors, Rev. Arlene R Beechert and Pastor Rebecca Cuddeback officiating. Friends may call from 6 to 8 p.m. Sunday, May 13, at the church. In lieu of flowers, the family suggests memorial contributions be made to the Rails-to-Trails Conservancy, The Duke Ellington Building, 2121 Ward Court NW Fifth Floor, Washington DC 20037. Arrangements have been entrusted to McCarty-Thomas Funeral Home, Hughesville. Expressions of sympathy may be sent to the family at www.mccartythomas.com.

Michael Paul Burkhart, 64, of Hughesville, died Wednesday, May 9, 2018 at Skilled Nursing & Rehabilitation Center in Muncy. Born July 8, 1953 in Muncy, he was a son of the late Max and Ruth E. (Padget) Burkhart. He married the former Kathy... View Obituary & Service Information

The family of Michael Paul Burkhart created this Life Tributes page to make it easy to share your memories.

Send flowers to the Burkhart family.