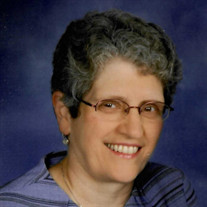 Mary Jane Smith, 70, of Forksville, died Wednesday, March 16, 2022, at her home. Born November 22, 1951, in Corning, N.Y., she was a daughter of Mary J. (Button) Jones Webster and the late Raymond D. Jones. She married Richard S. Smith on January 27, 1973, he preceded her in death on August 21, 2019. She is survived by her mother, a daughter, Kara L. Smith of Doylestown; three sons, Brett A. (Rachel Malick) Smith of State College, Brandon R. Smith of Forksville, and Brian S. Smith of Okinawa, Japan; two sisters, Betty Haslund of Elkland, and Sharon (Jerry) Fisher of Middleburg; two brothers, Gary Jones of Conn., and Richard (Esther) Jones of Fla.; and a grandson, Alexander Malick-Smith. In addition to her father and husband, she was preceded in death by a daughter, Shana M. Smith; and two brothers, Donald Jones, and Raymond (Skip) Jones. Mary Jane was a loving mother and grandmother who enjoyed traveling with her grandson and her late husband. Mary Jane could always be counted on to help someone in need. In her earlier years, she served as a 4-H Leader and 4-H Camp nurse. She spent over 40 years working in various capacities as a registered nurse. In her retirement, she had planned to serve as a volunteer driver for the American Cancer Society. Mary Jane was a faithful member of the Millview Wesleyan Church. She was an avid knitter and spent many days making anything from hats and baby blankets, to doggie sweaters. She loved watching her kids and grandson play sports and tried to make as many basketball, soccer, and lacrosse games as possible. A memorial service will be held 11 a.m. Saturday, March 26, at Millview Wesleyan Church, 6575 Route 87, Forksville, with Pastor Ed Ross officiating. Friends may call from 10 to 11 a.m. Saturday, March 26, at the church. The family will provide the flowers and suggest memorial contributions to the Millview Wesleyan Church, 6575 Route 87, Forksville, PA 18616 or Sullivan County 4-H programs, 9219 Route 487, Suite A Dushore, PA 18614. Arrangements have been entrusted to McCarty-Thomas Funeral Home, Dushore. Expressions of sympathy may be sent to the family at www.mccartythomas.com.

The family of Mary Jane Smith created this Life Tributes page to make it easy to share your memories.

Send flowers to the Smith family.