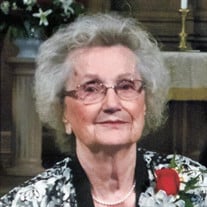 Mary Frances (Lubek) Peterman, 90, of Nordmont, passed away peacefully on January 26, 2017. Born September 14, 1926 in Hrustin, Slovakia, she was one of four daughters of John and Theresa (Halastik) Lubek of Sugar Creek, MO. Mary immigrated to the United States in 1930 with her family through Ellis Island and settled in Missouri. Mary was a graduate of William Chrisman High School in Independence MO, where she enjoyed playing basketball and softball. During World War II, Mary became pen pals with her brothers-in-law shipmate, John J Peterman of Nordmont, PA. Upon the end of the war they met, and 11 days later were married. They remained married for 69 years until John’s death in 2015. Mary was proud to be a Navy wife, travelling extensively across the United States for 27 years, before settling in Nordmont upon retirement. Serving as the Sullivan County Jail Matron, the inmates never had it so good, as Mary was quite the cook and baker. Mary was also an accomplished artist having studied in California, Florida and New England. Painting, reading, and most importantly family continued to be Mary’s hobbies until death. She was a member of the Sonestown American Legion Ladies Auxiliary, and St Basil’s Catholic Church. Surviving are three sons, John (Marie) Peterman of West Chester, Ron (Susan) Peterman of Portsmouth, VA, and Leonard (Teresa) Peterman of Fallston, MD; a daughter, Sharon (Leo) Cullen of Smith Mountain Lake, VA; 10 grandchildren; 17 great-grandchildren; and one great-great granddaughter. In addition to her parents and husband, Mary was preceded in death by three sisters. A Memorial Mass will be celebrated on Saturday, April 1, 2017, at 11 a.m. in St. Basil’s Church, Dushore, with Rev. Richard Rojas officiating. Burial will follow in Cherry Grove Cemetery, Nordmont. Friends may call from 10 to 11 a.m. Saturday at the church. Arrangements have been entrusted to the McCarty-Thomas Funeral Home, Dushore. Expressions of sympathy may be sent to the family at www.mccartythomas.com.

The family of Mary F. Peterman created this Life Tributes page to make it easy to share your memories.

Send flowers to the Peterman family.